In the beginning, there is nothing.

But there is a city, Montreal.
A city curious about everything, thirsty for adventure of any kind.

There is also a particular time of year, not quite yet summer but spring, when the seemingly eternal lethargy of winter finally gives way to an ardent desire to lunge into warmer days, into the beckoning light.

There is a timetable to complete, a two-week schedule to be filled in with the names of artists and shows that we’re very keen to present.

There is a budget, of course, but at first it’s not a major focal point – that comes later.

There is dance, there is theatre.
Expressions of the heart and soul practiced since the dawn of time.
Incredible vectors of intimate, collective euphoria.

There is the word contemporary.
A word that frightens many, even though contemporary means present-day or “of our time”.
What is there to be afraid of in our time?
Our times, perhaps.

There is the word creation.
A magic word that allows for the unknown.
The extraordinary.

There is often a dance or theatre piece that at first seems incomprehensible, inconceivable, that we’re tempted to violently reject it. But once we’ve had a taste of it we are obsessed by it, too bad for us. We want to understand it, if only in brief flashes. It’s like a riddle posed by a malicious spirit, a problem we intend to solve by hook or by crook.

I like to think of the reactions of astonishment of an audience discovering the incomprehensible, the inconceivable, the maybe even scandalous.

Like that singular sensation of plenitude when, onstage before our eyes, something is revealed loud and clear, blatantly clear. What was silent in the deepest recesses of the self emerges, provoking in the belly a puff of warmth that lightens us, that lifts us up, that is liberating.

I like to think of the reaction to the Stravinsky / Nijinsky piece The Rite of Spring on opening night.
And Les belles-sœurs by Tremblay/Brassard as well.

The Rite of Spring is self-evident.
As is Les belles-sœurs.
And J’aime Hydro also.

In the beginning, then, there is nothing.

And thus the overwhelming desire for the obvious to happen.

Looking ahead in unimpeded, uncluttered fashion, without any expectation other than the risk of boredom, is an approach almost lost in recent decades.

The art of the gaze – of looking, of observing.

Assembling a festival means to look, to watch, to observe in clear-eyed fashion.
It means listening with your eyes as well.

The treetop and the roots. The visible and the imperceptible. What is howled, what is murmured, the inexpressible.

The dance and theatre works travel through me. They circulate freely from my head to my belly and my heart, forming a magma, a powerful current feeding a festival program in the making.

Those shows float through me day and night, forming constellations that change from day to day with the passage of time, with my moods, my thoughts, the march of the world.

The bomb. The cornerstone. The trigger. The beacon.

It was in Hamburg, with its rain-laden sky
And the clouds ambling by
Its brimming barges lurking
Along the docks, bored to death

There was an Édith Piaf record that I listened to over and over as a child. I was fascinated by those stories of unhappy women who flirted with death, and C’est à Hambourg was a song about a prostitute.

At the time I didn’t grasp the meaning of the words, but it was the first time I heard the word Hamburg. The murky atmosphere underpinning the lament made a big impression, and was probably why I never had a particular desire to visit the city.

It was in Hamburg, however, that I experienced two artistic events of exceptional resonance. 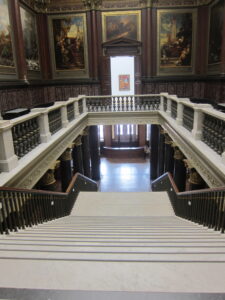 The first one was a few years ago.

On an October afternoon, before going to see an evening show I decided to shake off my jet lag by visiting the Kunsthalle, a museum full of rich collections. As I made my way through the building, enjoying each second of that silence found only in museums, I entered a room where I was alone, a vast room of high walls and large windows. And there I saw the celebrated painting by Caspar David Friedrich, Wanderer above the Sea of Fog.

I was thunderstruck and couldn’t help but utter a very long ooohhhhh.

I had previously seen many reproductions of this masterpiece of German Romanticism but suddenly stumbling across the original, with its traveller on the heights gazing down at the tumults of tormented nature, moved me deeply.

I stepped closer to better admire the black silhouette. Peering at his clothing, something became immediately obvious and I found myself shouting: BUT IT’S GREEN! HIS COAT IS GREEN!!! 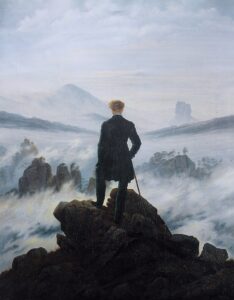 And indeed the Wanderer’s coat, which I had always thought was black as death, is green. A lovely deep green, as I imagine those age-old forests full of danger that this pilgrim ventured through before arriving on those craggy peaks.

And here I had thought the Wanderer to be a melancholy soul plagued by chronic pessimism. Yet there he was, full of hope.

In Hamburg, in the solitude of a city that I had feared, I was transformed by the colour of a coat painted in the 19th century.

Ever since, the Wanderer-in-the-Green-not-black-Coat has been a boon companion. He tells me to never take anything for granted. From the craggy heights he whispers in my ear, telling me to look, to take a careful look beyond the fog, the swirling mist, the clouds, in hopes of seeing something unnoticed.

The treetop and the roots.
The visible and the imperceptible. 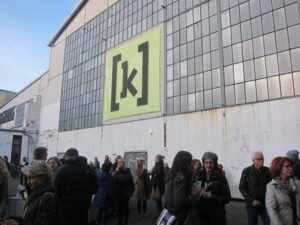 Like Anne Teresa De Keersmaeker, Jan Lauwers, Jan Fabre and Wim Vandekeybus, Alain Platel is part of a wave of Flemish artists that first washed ashore in Montreal in the 1980s, joyously tossing us into its rich surf.

I saw his work for the first time in 1996 at the Coups de théâtre festival. His show Mother and Child, co-created with the dramaturge Arne Sierens, packed a real punch, my very own Rite of Spring.

Espace Go. All the Theatre for Young Audiences crowd has come to see a Flemish show we’ve heard very little about, except that it hails from Ghent.

I am astounded, enthralled! The here and now explodes onstage as I had never previously imagined.

A fiery spirit, an incredibly organized chaos where everyone – children, adolescents, adults – plays and dances at full throttle, with no hierarchy. By means of banal, quotidian actions pushed to paroxysm, these bodies of all ages express with finesse multiple inextricable and twisted family relations – secret, tender, exacerbated or repressed, and all of it amidst a jumble of furniture, clothing and household items set to thundering pop music. The human race let loose under a slightly distorting lens.

Is it dance? Is it theatre? It’s all of that and more. It is life!

I can still hear the triumphant reception it received that night.

Since then the FTA has welcomed with open arms Iets op Bach, Allemaal Indiaan, Gardenia, tauberbach.

And always that fiery spirit, that generosity of ardent bodies.
Over the years, though, a certain gravity has taken hold.
The passage of time doing its work.

It was a full house at the Kampnagel, some 600 or 700 spectators.
From my own little crag I can’t see if my traveller’s coat is black or green.
I gaze straight ahead.
Alain Platel is waiting for me.

The show begins.
I am enchanted from the get-go.

A large screen serves as a backdrop. On it, a video close-up of the face of the elderly woman to whom this requiem is dedicated, L.

L. has an incurable illness and has asked for assisted dying. L. has offered these last moments of her life to Alain Platel, whose work she has long admired. With the agreement of her family, L. will let a camera roll until her last breath. Her face, gnawed by suffering yet serene before the finality that awaits, will be projected throughout the performance.

The sight of L.’s face is difficult to sustain. Filmed with modesty, her face is nonetheless implacable.

Music is omnipresent in Platel’s work. Previous shows have featured Bach, Purcell, Monteverdi. This time it is the genius of Mozart. 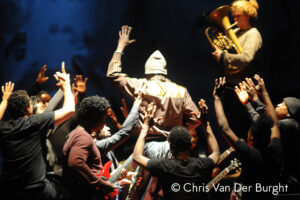 Onstage 13 men and women from the Democratic Republic of the Congo, South Africa and Belgium – musicians and singers. They fervently perform a poignant version tinged at times with jazz, at other times Gypsy imbued snatches from the famous Requiem, reworked by the composer Fabrizio Cassol, a longtime accomplice of Platel.

These men and women, with their triumphant black skin, make for an impressive funeral procession. They sing, play and dance. They draw from the music, bringing forth all of Mozart’s vitality to offer a life-giving counterpoint to death doing its work.

Light and darkness engage in dialogue.

I’m glued to my seat. I am neither a spectator nor the artistic director of a festival. I am simply a man watching a woman die.

I am a son thinking of his mother, who for the past few years has been slipping into a fog of oblivion.

The experience I am offered is frank, absolute, uncompromising.
Devoid of complacency.

Touching L.’s face are the hands of her children. They caress her face, bring her water, provide care for her final moments.

And then slowly, very slowly, the lights come back.
Bravos.
Applause.
Thunderous applause.
As if to cry out for life.

I break down, silent tears at first.
And then loud, hot, abundant tears.
What has just occurred has collided with the very depths of my life.

The bomb. The cornerstone. The trigger. The beacon.

I leave the Kampnagel and return to my hotel as though threading through a forest dense with ancient trees, heart and soul sated.

My coat is green.