May Eassy in CRIA © Renato Mangolin

All hail, great master! grave sir, hail! I come
To answer thy best pleasure; be’t to fly,
To swim, to dive into the fire, to ride
On the curl’d clouds, to thy strong bidding task
Ariel and all his quality.

These are the first words spoken by Ariel, a spirit, in Shakespeare’s The Tempest. 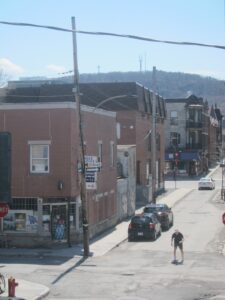 Montreal, Saturday morning.
But Saturday doesn’t mean anything anymore.
It could be Monday, or Wednesday, or even a day on the soft periphery of something yet to be invented.

The corner of Marie-Anne and Berri.
The future is perhaps uncertain, but the sky is blue.
The same azure of the paper sky, where languishes the floating silhouette of the FTA program, also appears on an Ariel with a yellow T-shirt on my dining room table which, as time goes by, has become a book lending desk staffed by a particularly disorganized librarian.

From my window Mount Royal sits like a promise just waiting to turn green.

This glorious weather is making poetry bloom in my bookcase.

Daylight is no purer than the bottom of my heart.

That is what Hippolytus says to Theseus in Phaedra to prove his honesty and integrity. 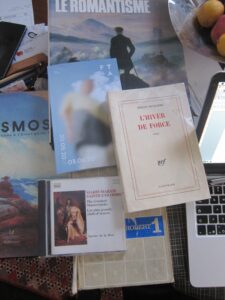 Each alexandrine line consists of exactly twelve syllables, twelve steps is a small ballet for the mouth.

Works that have passed the test of time give me strength for the day ahead.

On this spring morning, our winter of restraint (like a straitjacket), the season when we stay indoors because we’re old and afraid of catching the illness outside, is now beating a retreat.

Réjean Ducharme would not have minded this moment of seclusion.

Words, words, an effervescence caused by the rubbing of vowels on consonants, and thus a poetry, their flowering. They become phrases, witty lines from the mouths of all those characters begat by the power that is fiction.

There is the ball and chain of words, the weight of their implacable logic, their extreme precision that at times paralyzes; their inability to name what cannot be named, but what is rather confusedly, intimately, urgently felt.

Put words in my ears. There’s so little in there, they’re going to explode.

My record collection also explodes.
Marin Marais, the Sun King’s composer, prances from one room to another.
The bass viol of The Bells of St. Geneviève resonates throughout my apartment.

Little Ariel in his bright yellow T-shirt languishes in his paper sky. He wants to escape, to fly away, to twirl his heart out on the top of a triumphant Mount Royal bedecked in fruit, flowers and branches.

— Prospero, let me remember thee what thou has promised, which is not yet perform’d me.
— What is’t thou canst demand?
— My liberty.

She steps onstage, appearing suddenly from the darkness. She’s ageless. She has a soul. She has a strength that radiates.

She’s barely moved forward, hasn’t stirred a finger yet, but already she’s enlightening us. We are silent as we wait for her to lead us into the abstraction of her passion, into her eternal ardour. And then she dances. And we are in awe. She is Louise Lecavalier. We are in Dresden, Germany. Time stands still.

He stands there, ramrod straight, poised to unleash poetic cataclysms under the huge dome of the Society for Arts and Technology.

His sleek, agile body twists and turns in infinite contortions to muted electronic music. The elbows go abruptly in one direction, the knees in another, the pelvis is thrust forward, backward, and forward once again.

Master of the universe, he conducts the sophisticated live ballet of a digital cosmos. The vault of the concrete cathedral is peppered with a thousand and one delicate stars, fine off-white beams waltzing and undulating, spurred by the impulses of his body.

His piece is unfinished. He’s searching for the key to his metaphysical haiku. He is Hiroaki Umeda. Montreal is a laboratory.

He wants this to be transformative experience, paving the way for the body of the future. His piece is a work in progress. It is not yet called SIERRANEVADA, a title that emerges after thousands of kilometers of solo walking. He is Manuel Roque.

He is exploring the notion of collapsology, the study of the collapse of industrial civilization. He does not yet know that one year later he will not be able to perform his piece, because by then the world will have really fallen apart.

To boisterous, spirited, carnival-like rhythms, hes and shes and theys appear, stage right. They cross the stage and exit, stage left. And do so again, and again. An infernal, joyous merry-go-round. Spinning on their bums, hopping, running, bickering and hugging. Alone and two by two, in trios, in a group eleven strong. They form a fierce, happy tribe.

They are from the favelas of Rio de Janeiro, their joie de vivre surging forth in explosive outbursts, the way one imagines how the Brazilian people live. At the end of the show a gunshot erupts, killing the joy of a life well lived, as one imagines the violence that devastates the people of Brazil.

In Avignon on a hot July evening under a starry sky, between the tilting trunks of two large plane trees and surrounded by the ancient stone arches of the Cloître des Célestins, he arrives bathed in light to the accompaniment of sweet music from a secular Spain. He is, one after the other, a warrior virgin, an androgynous gypsy, an exalted San Miguel.

He and she sings, he and she dances, he and she is a virtuoso. He is lighter than these airs, melodies and serenades that soothe our souls. Seeping through the elegant, shimmering costumes is all the eroticism of a body difficult to pin down, to name, fleeing from our grasp, the better to snare us.

He is François Chaignaud. He comes from another time, making an offering of reds and golds, the grandeur of the centuries, a counterbalance to the mire, the base sordidness of our era.

These dancing bodies are manifestations, declarations of war, of love. They are ardent harbingers of revolutions.

Why dance? To transcend what, indeed? To bewitch whom? Who is the Sun King? Whose head is to be cut off?

These dancing bodies are seers attuned to the moods, energies and colours of our era. They are lightning rods channelling our anger. They are mirrors, clairvoyants bringing hidden beauty to light.

These dancing bodies are insolent, delinquent. They defy the laws of gravity, of the established order. They are driven by discipline, rigour and a fervour crying out for elevation.

These dancing bodies make me dance too.

Where the bee sucks, there suck I, sings Ariel on the verge of release.

The play’s title is The Tempest.

Despite the bright blue skies outside, a storm is brewing.

First, the body will prevail.

PREVIOUS ENTRY
Next ENTRY
ALL ENTRIES