There is no accounting for taste.
Ah, but there is.

In the previous century in a small town in the black-and-white photo of the province of Quebec, my father owned a clothing store, an army surplus store that also offered fishing and hunting gear. I imagine the items purchased were rugged clothes in khaki or shades of brown, or red and black plaid shirts on display under fluorescent ceiling lights. I don’t know, because it was before my time.

Later on he sold menswear, sober well-cut suits, immaculate white shirts, ties, belts, suspenders, undershirts and boxers shorts. French-Canadian men who wanted to succeed in life were well dressed in 1964. Building on his success, he opened a second shop above the store, Salon Jacqueline, named after his wife.

I remember it a little, no in fact a lot. Dresses, skirts, blouses in all sorts of fabrics and all kinds of colours. French-Canadian women loved to be stylishly dressed in the simmering Quebec of the Quiet Revolution. 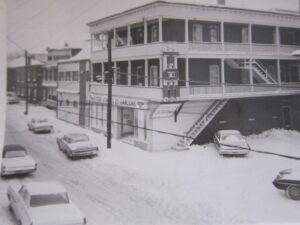 On Saturdays I would run into my father’s wothing store. I would charge through the long tunnels made by the display racks of jackets and pants. I would step into the fitting rooms as though entering a magical cavern. I would spend a long time looking at myself in the mirror, swallowed up by the far too big man’s suit jacket I was wearing.

Then I would climb on all fours up the pale wood staircase that led to the paradise of Salon Jacqueline, a veritable box of coloured crayons chockfull of the poetry of skirts and dresses, long and short, in wool, cotton, gabardine and muslin, or the polyester, viscose, nylon and fortrel of psychedelic print fabrics.

One day when I should have been at school my father took me with him to the big city, Montreal. It was a trip to purchase clothing for the upcoming season. We went to the garment district, to shops run by men from other lands. On that particular day he was purchasing clothing for Salon Jacqueline.

I remember sitting next to my father in a grey concrete showroom utterly devoid of charm. One man who spoke a strange French was showing us women’s wear, one item after another. Dresses, blouses, coats, skirts.

There was lots to choose from, and whenever I saw something I particularly liked I would whisper Oh, it’s beautiful, Papa.

Festivals and regular theatre and dance seasons are phantasmagorical spaces, boxes of coloured crayons just waiting to be opened with candour, with wonder.

Viewing, selecting and arranging, months in advance, on paper or on screens, the programming for a festival or a theatre is like walking in a city guided by instinct. Like stepping into a hidden alley to emerge onto a busy street with attractive façades you’ll remember for the rest of your life.

It creates a desire to paint the town red, or azure or chartreuse, to decorate imaginary walls with the evanescent, the ephemeral. To re-enchant everyday life with textures, nuances and details you never thought possible.

Frenetically rummaging through the vastness of the world’s bazaar, from the bric-à-brac of its attic to the stuff in its basement by way of the sumptuous splendour of its living room, all in the fervent hope of unearthing what has never before been seen. Or been poorly seen. Or misunderstood. Or not been loved.

With a certainty that the vague, hazy thing you’re looking for, the I don’t know exactly what, really does exist and is even more beautiful than you imagined.

What birdsong have I not yet heard? What is the fruit of that tree whose name I still don’t know? What is the river that irrigates this land of exotic consonants and vowels? What fish spawn there? What algae do the fish graze on? What are the forms, the colours, the textures?

A festival is a myriad of questions posed by the eternal child that we are.

Spending one day after another in a maze of rooms plunged in the dark, experiencing one disappointment after another seeing work that varies from the repetitive to the inoffensive, the too cerebral or the pleasant, and on to the mediocre, the ugly or the downright bad.

Still hoping for the grace of revelation that will inspire us.

And the fierce, triumphant joy of at last having found a strong, singular and previously unknown voice, a fresh voice that resonates loud and clear in all its originality, forcing us to listen to life with newly sensitized ears, life in all its flamboyance!

It’s simply a matter of strolling around avidly and intently.

They come from all over the planet.

I had heard about them, read about them.
But I didn’t know them.
Not then.
I wanted to meet them.
To get closer to their universe.

The countries they come from and the cities they live in inevitably trigger images associated with their social, political or economic realities.
And with the weight of history as well.

To be surprised and bewildered upon discovering their work.

Manuela Infante comes from Chile.
She writes and directs in Santiago.

The famous South American magical realism. The poetry of Pablo Neruda. Allende and the hopes of a brighter tomorrow. Pinochet and his horrors. The civil protests and demonstrations in the streets of Santiago last fall. 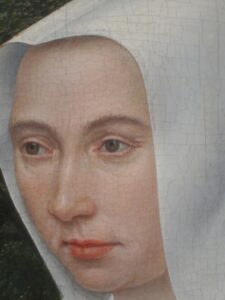 Louis Vanhaverbeke comes from the cloudy-skied Belgian territory that is Flanders.
He creates art in Ghent.
The chiaroscuro of Van Eyck’s paintings, the mystery of his Mystic Lamb. The grotesque Carnival figures of James Ensor. Jacques Brel’s flat country. The booming Flemish economy of the 1980s. The menacing presence of the extreme right.

A woman who prefers writing her name in lowercase letters, nora chipaumire, comes from Zimbabwe.
She creates dance in New York.
Angela Davis and the revolt of African-American feminists. The Black Panthers. The racial segregation that persists under Trump. The frenzied energy unleashed by uttering the word B-R-O-O-K-L-Y-N. The rich ancestral tradition of African bodies that we find fascinating, but about which we know almost nothing.

His first and last names evoke the whole of Greece from antiquity to the present day. His name is Euripides Laskaridis.
He creates stage and film works in Athens.
The plethora of gods and goddesses that rule the universe. Ulysses, Socrates, Helen of Troy. Tragedy. Philosophy. The cradle of democracy. Nana Mouskouri. The devastating financial crisis. 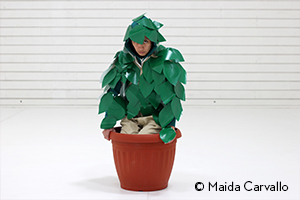 Santiago, a late night in January in the inner courtyard of a school or a convent, I can’t remember which. The program of the Santiago a Mil festival is rich and diverse. I’m attending the festival for the first time and find it a bit confusing. Estado vegetal by Manuela Infante is presented as part of Santiago Off.

Manuela Infante makes an ancient, generously branched tree the main character in her story. The tree is master of its territory. It upsets the social order, it provides refuge for the destitute, the lonely. It is a witness to death as well. It moves, it breathes, it has a sensitive nature, its own feelings. The intelligence of plants and a critique of the anthropocene are viewed through the prism of magical realism.

I fall under its spell. Manuela Infante’s secular tree has its place in Montreal.
It will bloom at Espace GO. 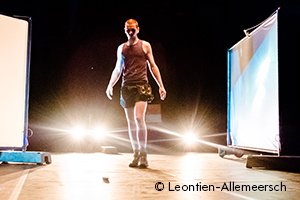 Louis Vanhaverbeke is an extraordinary inventor. At the beginning of Mikado Remix he escapes from an alienating virtual world, the better to invent a concrete world where machined materials dominate. As a good Belgian, Vanhaverbeke comes up with an unusual way of baking waffles, which we then eat! At the end of the show he escapes once again, this time from the theatre, freely roaming the city on his bicycle. We too have been liberated.

I see the show twice, first in Marseille where the venue is a too big for this solo. It’s a small crowd, and the show makes a medium impact. I see Mikado Remix again months later in Valenciennes. The venue is smaller and jam-packed. The audience is ecstatic. The show creates a sensation among the spectators, myself included.

This inventive techno wizard Louis Vanhaverbeke will be at home tinkering onstage in Montreal.
He’ll perform at Espace Libre and ride his bike down Fullum St.

I first saw nora chipaumire‘s work in Paris. A fizzled firecracker. I found her solo tribute to her father irritating, her stage persona disturbing, bordering on arrogance. Yet in the weeks and months that followed, I couldn’t stop thinking about her. I don’t know why, but my harsh judgement was wavering.

One year later chipaumire presented in New York a piece inspired by the iconic figure of the singer Grace Jones. 100 % POP is part of a triptych and was staged at Jack, a club in Brooklyn.

On a freezing cold night in January I arrived at the venue a little dazed, having lost my way in the deserted streets around the club. 100 % POP had already started. I was disconcerted by the immersive setting, where we were invited to stay standing and to dance. chipaumire turned out to be an extraordinary performer, committed and explosive, but the piece as a whole somehow eluded me.

Once again, I couldn’t stop thinking about her in the following weeks, images from the piece replaying in my mind. My judgement vacillated once again. 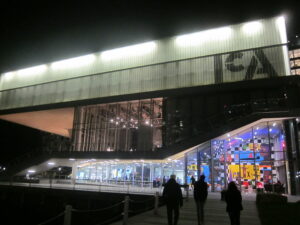 Her complete triptych, #PUNK 100 % POP *N!GGA, was presented last fall in Boston. I wanted to be sure, and after all Boston is fairly close to Montreal. The Institute of Contemporary Art was perfect for staging the piece, a place where chipaumire could let loose at full volume her fiery rebellion.

The audience was a mix of well-to-do whites and young African-Americans on the margins of society, not easily impressed. The three-hour presentation was a fiery, memorable outburst of dance and music.

That fire urgently needs to be lit in Montreal.
It will be at Espace GO.

The Biennale de la danse in Lyon is an intense experience. A place to get together with artists and their agents, fruitful conversations with colleagues from all over the world. A real hive of activity.

A big show at the Maison de la danse that had left me rather indifferent was followed by Relic, a solo by an artist I had never heard of, Euripides Laskaridis. It was almost 10 p.m. I climbed a staircase and found myself in small space of about 70 seats. The show was short, my long day almost over.

From the first fluttering of his eyelashes, I was hooked. It’s clowning, it’s burlesque, it’s the drag queen Mado Lamothe meets Beckett. The distress of human loneliness magnified by bright lights, cartoon sound effects and makeshift sets and props. Fifty minutes went by at lightning speed.

The highly personal mythology of Euripides Laskaridis must find a nest in Montreal.

His Titans was presented at Usine C in 2018.
So now, to open FTA 2020 on the stage of the Jean Duceppe Theatre, his first large-scale piece, Elenit.

Elenit asks the most important question there is: What is the problem?

Festivals and theatres are wothing stores, showrooms with many charms.

It is where we see things take shape, opening out to the infinity of objects, entities and materials of all shapes, all genres, all colours.