Living in Montreal.
Getting lost.
Seeking a way, your own path.

Montreal, where the humble charms of a society rooted, for the most part, in a rural and Catholic tradition, and then working class and Catholic, oppressed, smashing into the ugliness and banalities of a modernity punctured by asphalt highways and roads. 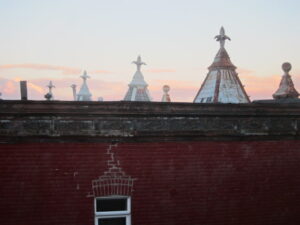 Walking through Montreal and its contradictions, the linguistic, religious, secular, economic and cultural paradoxes that form its unique character and identity.

Less than 400 years ago it was fields, river, streams, forest.
Fish, animals, flowers and trees.

The dominant force then was the dance of nature, the story of the natural world.

Taking the time to contemplate, gazing at all the red brick buildings, all those balconies like tiny theatres perched aloft.

Balconies full of potted plants coming into bloom, a way to reconnect with vanished fields and razed forests, to get closer to the sky and to flying fauna we can no longer name.

Gleaning, night after night in its many theatres big and small, snippets of answers to what I have always tried to understand, the spirit of the times, the density of time, the anxiety of time.

At the dawn of the 1980s I was learning about the intricacies of the world in a highly frenetic Montreal. Artists of all ages and backgrounds were dressing our post-referendum wounds by brazenly shattering our identity complexes.

The entire planet belonged to them, and by the same token, to me as well.

I rediscovered the actors and actresses that I had got to know via the thick glass of the television set of my childhood. There they were, in the flesh, beautifully free, let loose. I was inspired by them, very much at ease in their bodies, flamboyantly sexy, confident in their vulnerability.

I was everywhere, in every nook and cranny of the city. Large theatres with a subscription audience, minuscule cafés-théâtres, illegal squats occupied by experimental troupes. I went to the mythical Théâtre des Variétés to observe with emotion the great tradition of burlesque in its final moments.
I dared to plunge into Montreal’s English-language theatre. Political convictions being what they are, I spoke very little English. The discovery of the other, the so-called enemy, came later. 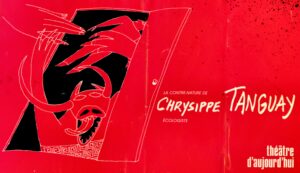 To witness the effervescence of Quebec writing, staging and performance at the old Théâtre d’Aujourd’hui, now on Papineau St., meant walking through a somewhat shabby inner courtyard, climbing a steep outdoor metal staircase, entering a very cramped hallway, then climbing down into a room of a hundred seats where the stage was dominated by an insolent wooden pillar.

It’s the story of a homosexual couple that wishes to adopt a child. They kidnap a social worker come to assess their suitability as parents. I found the play sordid, amoral. The staging by André Brassard evoked all the wanton excess of Greek mythology, but set in an apartment in the Plateau neighbourhood. 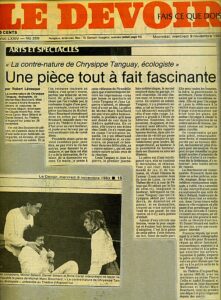 I was disturbed, mystified.

Is that what the world can be like?
Yes, and it can be other things as well.

I left the decrepit Rialto Theatre shaken, in shock.
I had just seen bodies of frightening velocity, electric guitars screaming their rage to live; the law of gravity defied, the timeline shattered.

The show had a disconcerting title: Businessman in the Process of becoming an Angel. It was by an unknown choreographer, Édouard Lock. Also unknown was one of the dancers, Louise Lecavalier.

I walked down Park Avenue strangely happy.
My growing incomprehension of the world made me powerful.
That incomprehension would from now on be my fire, my driving force.

Each new play or dance piece is a poetic equation that becomes part of the Montreal skyline. Montreal is peppered with these fantastic equations.

Through the corner windows of my office, you can see on one side the top of Place Ville-Marie, and on the other the buildings in Old Montreal. In the distance, rare shards of the St. Lawrence River, sometimes bluish, sometimes silvery. 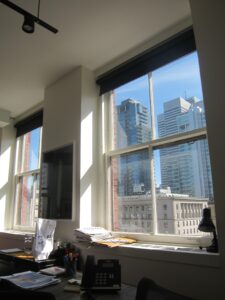 One side touches the Montreal of modernity and the Quiet Revolution. As for the other, hidden by the Montreal of New France, one can only guess at the generous welcome the city received from Nature.

The Montreal of the First Nations is invisible, as is the case almost everywhere on Turtle Island.

The artists who come to see me are smiling and shy.
Meetings take place at my desk, where the light is brightest.
Through the windows, Montreal makes itself available to them, our common horizon.

That moment of encounter is precious, intimate, as much for them as for me. They come to tell me about new dance or theatre pieces they want to create, to deliver projects they have been working on for many months, even years.

Words trip against each other in their mouths, truncated or elided.
To translate their dreams, to define their contours, words are clumsy, imprecise, clearly insufficient.

I listen to those ellipses, let them float in the Montreal sky until they form the promise of a new world. 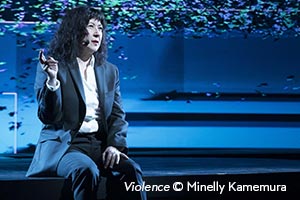 Marie Brassard talks about a show based on a phrase spoken by her niece, And chaos knocked on God’s door, a piece about our contemporary violence, our solitudes. She speaks of Japanese designers and performers, of digital coloured projections as the set design, of altered sounds, of keening and laments.

The softness of her voice conceals bewitching landscapes.
I embark on a journey with Marie Brassard.

Violence takes shape before my eyes, already under construction.

Mélanie Demers is haunted by dark imagery, flashes of a macabre parade, a grotesque funeral procession, an orgiastic celebration of the end of a known world. She wants debauchery onstage, a savage, baroque feast with lots of costumes, rainbow-coloured dresses, flashy jewellery, a rabble of 9, 10, 12 performers sweeping across a big stage. Flipping between contrasts, between sensual excess and degradation. An apocalyptic work.

Her fervour is palpable.
The Post coïtum parade has not yet taken shape, but is well underway.

Daina Ashbee has so far created radical, uncompromising solos. Feminine mystique in all its shamelessness. After a tentative first attempt working with young dancers in Venise last year, Daina wants to create her first ensemble piece. Like living sculptures, women of different generations would move, very slowly, through a floating garden. Daina wants to stretch out time. The title itself is a poem, J’ai pleuré avec les chiens.

That floating garden, where time expands in a frantic world, is already sown.
We will watch it grow.

Marie Brassard, Mélanie Demers and Daina Ashbee head back down to St. Catherine Street.
They spread hither and thither throughout the city, getting on with the task at hand.

Montreal is home to numerous secret rooms in abandoned factories and outmoded sweatshops and mills, in unoccupied schools, in the unseen second-floor back rooms of theatres, protected spaces where a vibrant emptiness reigns, territories essential to the gestation of a show – rehearsal halls.

Crossing the threshold of a rehearsal hall means saying to yourself:

Marie Brassard, Mélanie Demers and Daina Ashbee live in those rehearsal rooms where the most intimate gestures are presented, where shameless things are expressed, where ripe, full silences thrive.

Rehearsal halls are the workshops of tomorrow.

St. Lawrence Boulevard where the English and French cultures of Montreal come together, where east and west meet. 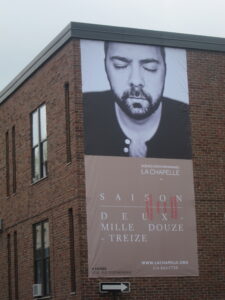 I like this neglected, often dirty part of the street, proud of its difference, a nowhere forgotten by highly qualified urban planners whose efforts to do something for our own good are often sterile and impersonal.

I like that fact that someone walking past this anonymous brown brick building would never guess that there is a theatre within.

I like its community centre staircase leading to its closet-size box office.

I like its modest lobby and its two unisex toilets where, if you come out too suddenly, you risk smashing into a spectator on a busy night.

I like the blonde wood folding door that opens onto the theatre space and its concrete block walls, like those found in school gyms or commercial warehouses.

I like making my way up the tiered seating and the crackling noise underfoot, step by step.

I like the sagging seats covered in burnt orange velvet. Their advanced state of disrepair puts me in a good mood, eager to see the most diverse, the most innovative artistic projects, even the most ignominious failures.

At La Chapelle I sometimes run into Marie Brassard, Mélanie Demers, Daina Ashbee or Louise Lecavalier, who have also come to take a chance on the unprecedented. 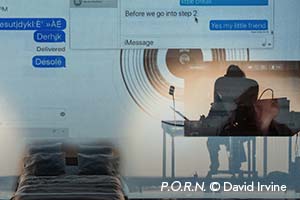 At La Chapelle, Nadia Ross and Christian Lapointe present a first version of their show. They venture into various social media sites where pornography is a mirror, a reflection of contemporary couples.

I’m convinced that the show belongs in the Festival.
I wonder what Nadia and Christian will find as they delve deeper into their research.
In its current form P.O.R.N. already packs a powerful punch.
We shall see. 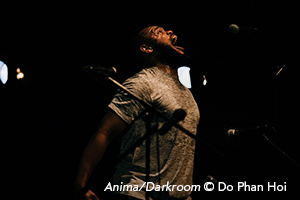 I don’t know Lucy May.

I’m attending a show one night in a municipal cultural centre. Lucy May is sitting beside me. She introduces herself, tells me that she’s working with a dancer on a show that features krump, an urban dance form unknown to me.

The piece will be presented next year, probably at La Chapelle.
If by any chance…

One year later at La Chapelle, I’m blown away by Anima / Darkroom.
7Starr, the performer, is magnetic.
It starts out like a standup comedy show. 7Starr is devastatingly funny in French and English. It ends like a David Lynch film with 7Starr fading into the angst of silent darkness.

From beginning to end, 7Starr’s body explodes, spins and twirls, howling with raw feeling.
The visceral need to be seen and heard.

Anima / Darkroom was presented for 3 nights only.
The adventure must continue. 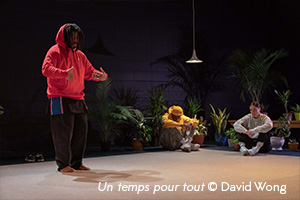 I had heard about Un temps pour tout, where Sovan Rochon-Prom Tep brings hip-hop colleagues with hard to pronounce nicknames like Sangwn, Pax, Jigsaw, to perform along with jazz musicians; was told that it was a fantastic show.

I had never seen La Chapelle rearranged in such a cosy, inviting ambience. Spectators share the stage space with the performers amidst throw pillows, potted plants and cups of tea. The audience is diverse and family friendly. Children run around the stage and on it as well. The virtuoso dancers from marginalized artistic communities convey absolute freedom. We are carried away by the live music. It’s like being invited into your new neighbours’ living room.

The generous, invigorating gesture that is Un temps pour tout absolutely must carry on so that it can continue to offer sweet blessing.

I leave La Chapelle strangely happy, feeling powerful.
My incomprehension of the ways of the world is my fire, my driving force.
When I manage to pull some threads from the tangled skein of the world, I feel a certain satisfaction.

I step back onto St. Lawrence Boulevard.
Merging with the east and west of Montreal.
I raise by eyes. In the sky above I see new equations and all their unknowns.

Living in Montreal.
Seeking a way, your own path, for a long time.

Previous entry Next entry All entries