I am floating in a confused, blurred time, an indecisive zone between nostalgia and utopia.

Yesterday and the day before yesterday, so deliciously careless.
Tomorrow and emergency, tomorrow and re-engagement.

Over the past few weeks two great actresses I loved, and a great singer I loved, passed away.

In leaving us, Monique Mercure, Michelle Rossignol and Renée Claude gave renewed lustre to their glorious accomplishments, their outrageous characters, poetic convictions and sweetly flamboyant songs, reflecting the glory of an era where absolutely everything was possible in a Quebec whose horizons knew no limits.

A life of making another’s words your own, of probing the twists and turns of thinking, of deciphering a complex but devilishly well written score and embodying it with ferocity, elegance and refinement in the pure pleasure of the present moment, the ephemeral perhaps, but a transience that is part of a certain form of eternity.

The tenacious and oh-so rejuvenating imprint of long-lasting artists.
I walk along the streets of my city.

After a too brief period of calm, once again the rumble of traffic on St. Denis Street.

I look at the façades and the display windows, at dead-eyed restaurants and theatres. I do not know what will remain, what of the past will constitute our tomorrows.

Preserve the essence of those who came before us, pass the torch to other hands. 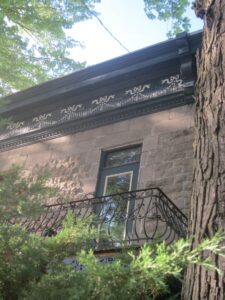 I look up. Between the branches of trees rich with fresh new foliage, I contemplate roof cornices of tin, sheet metal, copper and wood, decorated with pretty geometric figures and delicately worked floral, vegetal or animal motifs.

I think of those hands, the many hands of workers, of patient, sensitive, humble craftsmen, their know-how intended for utilitarian purposes but also to delight the eyes, those skills that can no longer be taught, or are taught too little.

I think of Venice la serenissima, that distant Venice suffocating under the weight of knick-knacks, cheap trinkets and floating skyscrapers, Venice that has started to breathe again, to see clear water now its canals, jellyfish visible from the surface.

But Venice once again offering herself to the barbarian hordes that we have become.

And I think of Aleppo, one of the world’s oldest cities, a once opulent, rich and dazzling city, a must-see stopover on the Silk Road.

Ancient Aleppo, now in ruins, a place of devastation. 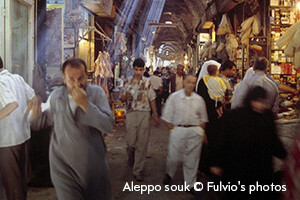 At the Monument-National, boulevard St. Laurent, Aleppo. A Portrait of Absence, a show created by the Syrians Mohammad Al Attar, Omar Abusaada and Bissane Al Charif.

Returning home, with imagination your only baggage.

Observations, sensations, anecdotes, the force of words to evoke the splendours of the city’s past, to celebrate its busy and lively day-to-day life.

Ten Montreal performers of diverse origins were to give body and voice to the testimonials of the inhabitants of a beloved city.

Questioning one’s own sacred spaces and their possible, eventual or proven disappearance.

The power of memory in the face of destruction.

For months, no stories have been told on our stages.
The theatres are empty, the spectators’ seats unoccupied.

Another story unfolds elsewhere, unexpected and disconcerting, day after day.
On the radio, in the newspapers.
In the streets, in homes, in the sky.

It is the story of our glittering prosperity, of our air-conditioned comfort, which in the end turns out to be the shameful story of our poverty, of widespread injustice and indignity. 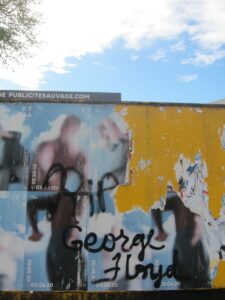 It is the story of men and women who, at the end of a long life filled with happiness and toil, die alone, unable to hear the singing of the birds or to take in their arms, for one last time, those they love – us, their children.

It is the story of beauty penetrating through flaunted greed and brazen insensitivity, beauty that at all hours of the day and night regains its rights, infiltrating every crack, rift and crevice in the bewildering megalomaniacal ruins that our cities and suburbs have become.

While this story was being told, the month of May saw both snow and a heat wave, fruits and vegetables eagerly waiting to grow.

Our neighbours to the south were hit with the tragedy of George Floyd, a man who simply wanted to breathe.

That 8-minute and 46-second tragedy could have happened here, happens here.

So we need to get back on stage, take hold of this new present.
We have to imagine new stories and tell them, dance them, over and over and over again, so that everyone can breathe.

A certain spirit of the 22 scheduled shows hovered over the 15 days when, normally, to better live life through art, the Festival suspends time, accelerating it, making it denser.

This year it was a time of staring at screens, a time of isolation, of contemplation.

This 2020 edition, the one which didn’t take place, would have been characterized by the conditional. A verb tense that screams melancholy.

The sadness of the joy there would have been in discovering these 22 works, looking at them with eyes wide open, tasting them with heedful ears. Even the least successful works, even shows we might have found off-putting, disappointing or displeasing, would have brought us joy.

In final, polished form or making their first tentative steps, the 22 shows, an artistic journey celebrating Life, Life, filled me with happiness, with pain, like the phantom pain following the amputation of a limb.

The stupor of the amputee.

Today in early June, this edition of the Festival that did not take place is well and truly behind me.
Finished.

I feel it physically – a slow, dull pulse.
Something real, something tangible is letting go, moving away, leaving me.
Freeing me.

This chronicle is the 7th.
The last.

Trying to put an end to what remains imperceptible, elusive, swarming, to the energy driving each edition, to what it has generated that is unique and unheard of, against all odds.

These chronicles have borne witness to the seesaw of emotions experienced since the virtual unveiling on March 17 where, through the windows of my 8th floor office, the Montreal sky was beautiful, blue, exceptionally pure.

The vibration of colours in extreme situations.
The depth of the silence that echoes the futility of our pointless chatter.

Captured by the benevolent eye of the camera and presented to a generalized anxiety, I released into space the entire festival program, so that life might continue to thrive.

The most delicate aspect of the unveiling of March 17, the most serious, was choosing the flowers to be placed behind me, flowers that, with their fragile uniqueness displayed in a bouquet, give me courage.
I wanted to have flowers at my side.
Whatever the cost.

For the past few days a humpback whale has been frolicking in Montreal’s harbour, mischievously appearing and disappearing in the waters of the St. Lawrence.

The wayward humpback whale is not in its natural habitat.
It has lost its way on Turtle Island.
Its eerie, ephemeral presence thrills, questions, delights, disturbs.

And it finally washed up on the shores of Montreal.
Unnatural. Alone.
Hit by a boat. 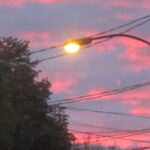 These chronicles are also a prologue to the incredible unknown that awaits us.
To the furious desire to build a world that astonishes, exasperates, enchants!
By means of art and flowers.