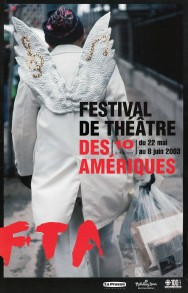 Designed to charm, shock and disturb, its purpose is to upset the applecart of safe, clean theatre, throwing us headfirst into furiously appealing works that reduce our conventional theatregoing habits to ashes. It comes via a name to remember — Rodrigo García.

And on the Thousandth Night

And on the Thousandth Night

An entire night of tall tales — stories of horror, of ghosts, princesses led astray, crazy neighbours and slimy politicians. Love stories that never end or that end badly, tales cobbled together from legends, traditional yarns, true facts, anecdotes, gossip and jokes. Risqué stories, tales that have been short-circuited, borrowed and reworked or pushed to new heights and depths, from black cats to the man on the moon. In an atmosphere that lends itself to pure invention and improvisation that snowballs, eight rough-and-ready kings and queens of the night steal each other’s thunder, telling tall tales while sipping tea. In need of a story in order to hold on and stand fast ?

Deep within the bowels of the Northwest Territories were nestled two atomic bombs — Little Boy and Fat Man. To bring back to life the memory of those who died as we charged along the road to uranium, Marie Clements has symbolically retraced their journey. Starting from the land of her ancestors, she travels down the length of the Mackenzie River, crosses the United States and makes her way to Hiroshima. Looming from the shadows are characters she has created.

Chekhov Longs in the Ravine

Chekhov Longs in the Ravine

A few bricks, a couple of chairs, some music and traditional Russian folksongs and voilà ! The little village of Ukleevo in late 19th century Russia is brought back to life. There, in the ravine, live poor wretches, exploited and abandoned by God, living their lives under the tender and compassionate gaze of Dr. Chekhov. A storyteller steps forward. He is soon accompanied by four women who portray the many characters of this comic, touching tale of a family of money-grubbing predators soon to be visited by misfortune.

Sarah Kane committed suicide at age 28, leaving behind radical and extreme writing of a rare violence, plays that highlight horror and rip our remaining illusions to shreds. The brutal echo of her work still rings out on stages around the world. Director Krzysztof Warlikowski is the blood brother of this tender, tormented soul from London.

We live in our neighbourhoods and walk down the same streets day after day, greeting the same anonymous faces and entering the same stores and the same buildings without noticing the life pulsating within. Without being aware of it we are playing a role in a play, but don’t know the name of either the playwright or the director. What if the curtain were to suddenly rise to reveal the real truth, the intangibles, all the acts and scenes bursting forth in our daily lives and all the characters who compose the backdrop of our existence ?

To enter the family home and behold once again the past­the old furniture, the old records, the whole place laden with memories and emotions. Coming back home ? No, for there is no going back. Time lost can never be recovered, and nostalgia is not what it used to be. It is not so much the past that we miss as the present that eludes us, for we ourselves are not all that we could be.

Onto a stage decked out entirely in red curtains bounce seven vaudevillians, stepping lightly across the boards. All but one that is, the token jack-in-the-box. All of them make their way to the front of the stage, presenting themselves to an audience eager to be won over by their Pepsodent smiles, their sequined dresses, their long, sleek legs, their shimmering costumes, their gala hairdos and make-up. With a microphone, a saw, a chair, some balloons and signs plus a few flashy tunes and lighting effects, the actors dance on the heads of pins and set the cat among the pigeons to create theatre of real substance.

Continuing his quest for sense and beauty, Wajdi Mouawad has plunged into the turbulent depths of writing to discover, washed up midst the sand dunes, fiery tales lost in the mists of time. Making their way through the dunes are Nawal’s twin children, Jeanne and Simon, who want to solve the mystery of their origins.

With eleven actors, a team of designers and a 20-voice choir, Lorraine Pintal is turning Louis- H. Lafontaine Hospital into a theatre stage in order to examine the various facets of Asile de la pureté, a play written in 1953 by poet Claude Gauvreau. The troupe’s occupation of the space will be dictated by the architecture of this place of internment. From the monumental (a road marked out by a funeral procession and the coffin of his muse Edith Luel) to the miniscule (young Marcassilar’s room), this parade of the fools of power hovering round the sick bed of the rebellious will take on the allure of a macabre circus.

A bare stage is the setting for Duras’ theatre of the interior, the disaster that predates all her writing and the story that she always returns to — the Indochina of colonial times, the Chinese lover, family madness, a criminal older brother and a mother who is Mother Courage, the maternal figure to whom one remains forever attached.

Why put on the classics ? Because they help us understand who we are, where we come from and where we are going, and indeed, César Brie is utterly convinced of their relevance. Born and raised in Argentina, he now makes his home in Bolivia, where he is deeply involved in the life of his new country. He went back to The Iliad to better address the present, the thirst for power and conquest currently wreaking havoc around the world. He has assembled a troupe of artists from diverse backgrounds, integrating rites and traditions from all over Latin America.

Bewitched by her actress, Marie Brassard is literally swept away. While speaking to a dear friend who lives in New York, she finds herself at the scene of an accident. A suburban street, a school textbook, pages blowing in the wind. A little girl vanishes and a young skinhead dances with the ghost of his little sister.

The sets are being remounted for Robert Lepage’s La Trilogie des dragons, which will be presented in a railroad repair shop. Accompanied by a new team of designers and actors, he is returning to this unforgettable saga that hurtles like a comet toward an imaginary China. In a parking lot is a sentry box standing guard for the dragon of immortality, as well as a crystal ball full of swirling stardust. Under a flickering light they come alive as characters whose destinies become tangled up, one way or another, in the flaming red hair of Stella, a moonstruck child. The scents of East and West, the ruins of war, dreams smothered in the sheets, little girls’ fancies and fears lodged in a shoebox and ancient knowledge inscribed on fans or coiled up in the movements of tai chi all combine to create a waltz that dances between destiny and history.

Like a backstage making of, this piece closely follows four actors who are caught in the tight squeeze of fundraising for a project they are completely committed to. During the course of rehearsals, a script that has been concocted by two language virtuosi begins to take shape onstage, focussing on the twists and turns in the lives of young artists in their early thirties.

A formidable manipulator of fictions, Marcelle Hudon takes an intimate approach to material and motifs from a larger-than-life stage. In this theatre of shadows, a video camera records, defines and restructures the movements and actions of tiny puppets, characters cut out of paper or drawn from history books, closely following their progress in intertwining tales as though we were in a late-night dream or had taken leave of our senses.

A dried-out tree, a few plants, some terracotta flowerpots, an armchair, some sand, a sweater and an old turntable. A young girl raised like a rare, fragile flower by her gardener father who transplants her from vase to vase, seeking the right soil for her to truly blossom. An absent mother and a brother who has gone astray. An arid land that is now barren.

Internationally renowned as a performance and installation artist, Julie Andrée T. pursues her utopian pursuit of the loss of identity, provoking an encounter of bodies with staging that defies the laws of gravity and perspective.

As seductive as vice and as free as Molière’s Don Juan, who fears neither God nor the devil, this is a dark and fascinating Richard III. Through the excess and the monstrous actions of this hideous toad, Shakespeare helps us understand human behaviour, directing our gaze toward the victims of power, be they in Bosnia, Palestine, Iraq or Colombia.

THE INSULTED AND INJURED

THE INSULTED AND INJURED

In order to dismantle the totalitarian logic of Big Brother, Frank Castorf gives a hard-core edge to soap opera, employing a reality TV approach to this presentation, which is loosely based on Dostoyevsky’s first great novel, The Insulted and Injured, written upon his return from exile and imprisonment in Siberia for subversion. The set is an imposing affair, a massive structure worthy of a Hollywood movie lot, complete with screens and live musicians. It pivots to reveal a glass house on one side and a shack on the other.

Some thirty spectators find themselves in a gloomy locale that is home to mutant scientists in a creepy lab. On a tiny stage (16” by 16”), majestic characters — vile, magnetic and utterly compelling — engage in dark, deranged combat.

At the back of the stage is a large screen showing a silent black-and-white movie. Onstage are young actors aged 10 to 15, listening to headphones and dubbing dialogue for the movie. The camera prowls round the property displayed on screen — an opulent mansion, expensive cars, fine furniture, paintings, silver cutlery and vintage wines. The dolce vita!

F as in Fire, Flame and Fiery. F as in Feast, Folly and Fascination. F as in Fabulous pyrotechnic alchemists, for indeed, Groupe F plays with fire. It takes possession of the heavens and of the night, juggling with flames and ingenious devices, sculpting the air and the elements, directing symphonies of fire that excite and delight.