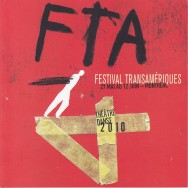 This is bare bones theatre – no set, no costumes, not one single lighting effect (no lights up at the beginning or lights down at the end), no music – nothing, nothing at all in the way of support. The only thing present is an actor brimming with energy, invention and precision, armed only with his anger, his intelligence, his humour and… his laptop.

The capital of the Aztec empire, Tenochtitlàn, was established in 1325 on an island in the middle of Lake Texcoco, long before becoming Mexico, the city in the middle of moon lake. Long before indeed, for of the 2000 km2 of lakes sparkling in the Mexico City area, now only 10 km2 remain. After three centuries of irrigation to eliminate the risk of floods, the city is now thirsty. Asalto al agua transparente is the story of this ecological disaster.

Alone onstage, Gabino Rodríguez recounts in minute detail the end of a love affair. Souvenirs, music, photos, videos, text messages – he displays them one after the other, evidence of his private disaster. These fragments of a break-up are presented in an implacable list, and ultimately the absent woman dominates the story. An autobiography placed on display? Youthful excess? An exhibition of memory?

Children + A Few Minutes of Lock

Children + A Few Minutes of Lock

A dancer of burning passion, Louise Lecavalier presents a double program marked by electrifying encounters. Children is the fruit of a recent collaboration with Nigel Charnock, the unrepentant enfant terrible of British physical theatre.

Cast and audience are enclosed together in the same secret space where decryption specialists listen to telephone and computer conversations from all over the world. A voice emerges, proclaiming the arrival of “gasping time” and stating “Parricides over here”. Is the voice somehow linked to the imminent terrorist attack that threatens eight big cities? And is the suicide of one of the code breakers a lead worth following?

Amusing, ludicrous and sometimes downright embarrassing, the questions come thick and fast into the ears of spectators equipped with headphones. “Have you ever followed a complete stranger down the street? Have you ever pretended to be drunker than you actually were to avoid having to make love? Have you ever shoplifted something from a store?” Assembled in a public space, the spectators respond with their bodies, obeying strict instructions. “Step forward. Raise your hand. Gaze up at the sky.”

FROM ME I CAN’T ESCAPE, HAVE PATIENCE!

FROM ME I CAN’T ESCAPE, HAVE PATIENCE!

Each performer follows an individual score, but all of them seem subject to forces that outmatch their will and ability to resist. Like water turned swirling and choppy by a puff of wind, they react to the variations of the music performed live at the piano by choreographer Tânia Carvalho.

For multidisciplinary artist Tammy Forsythe, art has the power to change the world. Committed to dancing every day, she translates the political landscape of our times into movement, voice, drawing, bookbinding, music and video.

Alone in his apartment, Serge escapes the burden of the everyday by concocting micro-performances, one to three minutes in length, that he presents every Sunday to his friends. With small remote-controlled toys, blue flares and flashing headlights, he brings odds and ends to life before our eyes, creating an astounding fairy-tale world that hinges between reality and artifice. For this phlegmatic, dreamy anti-hero, secreted within the emptiness of contemporary life is flamboyant material for invention.

Who would have predicted that one day Sylvain Émard would combine contemporary dance with line dancing? Who would have believed that the choreographer, renowned for his refined style and precise movement, would rely on the authenticity and brio of amateur dancers to galvanize audiences? In realizing that fantastic challenge for the FTA in 2009, this major figure in Quebec contemporary dance provided resounding proof of the unifying, festive power of dance in a spectacular outdoor presentation.

What have we inherited? What are the forces from the past that, despite everything, determine our thoughts and actions? In this monumental work, with its boundless lyricism and exceptional performers, Wajdi Mouawad thrice takes the audience from darkness to light. Wilfrid in Littoral, Jeanne and Simon in Incendies and Loup in Forêts are very young adults who find themselves facing a terrible destiny – war, exile, perverted ideologies, dehumanizing events – forces that have fashioned our times and our lives.

A choreographer, dancer and visual artist, Saburo Teshigawara is keenly aware of the power of images. His dance pieces contain striking imagery, and he has become one of the most important artists of our time.

In the Congo, people like to get swept away by music, particularly Ndombolo, a free-wheeling hybrid music, big with traditional rhythms in a blend of rumba, pop and funk.

A visionary choreographer, Merce Cunningham tirelessly reinvented the vocabulary of contemporary dance for over half a century.

Long fascinated by the human body, a fantastic and multifaceted machine, the choreographer Ginette Laurin penetrates here into its innermost depths.

A piano, Chopin, a woman wearing nylon stockings, a black curtain and frenetic dancing. Black and white images of cars, fire, an apple and a man lying down.

The silence is broken by a woman’s low-pitched voice. Her song speaks of an Africa mired in violence, and her anger mounts. Surrounding her are seven male and female dancers, plunged headlong into the fire of combat.

Shakespeare that jumps straight from the headlines! Ongoing war, secret deals made by politicians, on-the-spot interviews, fiery speeches about democracy, cameras peering into the private lives of men and women lusting for power – it’s all in Shakespeare’s writing. It was simply a matter of giving this world of turmoil a theatrical form that hurls it headlong into the very heart of our era.

A lonely, ageless woman lives in a modest home in Leningrad in the 1930s. With a heart of gold and the soul of a child, she has an innate sense of beauty and an immoderate appetite for life. Sonia sews with care, cooks to perfection, dreams excessively. She has everything going for her, except that she is ugly. Through sheer spitefulness, her entourage convinces her that a certain Nikolai is languishing with love for her, sending her passionate letters for many years.

The Dragonfly of Chicoutimi – 2005

The Dragonfly of Chicoutimi – 2005

Right away, Gaston Talbot declares “I travel a lot”. But the audience soon realizes that he has never travelled. He adds “To keep in touch”. Again, we soon grasp that he does not speak English, but rather French expressed in English words. Gaston Talbot is constantly revising, correcting and changing what he reveals about himself, his mother, his dark childhood games with Pierre Gagnon or what he says about the traumatic dream from which he awoke, after years of silence, speaking English. Bit by bit Gaston Talbot pulls us into a spiral where truth, after endlessly shifting and twirling, takes us to the abyss.

THE GREATEST CITIES IN THE WORLD

THE GREATEST CITIES IN THE WORLD

Wim Wenders portrayed the landscape of Paris, Texas. But what do we know about Paris, Tennessee, the catfish capital of the USA? The state is also home to Rome, Moscow, Athens – best known for its ice cream – and London, a hamlet on a dirt road in the middle of the Cherokee National Forest.

His last piece, Gravel Works, was rock; this one will be folk. Frédérick Gravel takes on the confusion of the contemporary American male, whether he hails from a bland suburb, a country road or a cowboy movie.

An improbable duo wanders through the streets of Montreal. One is the spectator-walker of Tu vois ce que je veux dire? He wears a blindfold; his connection to the world around him turned upside down. Noises and smells are intensified, his perception of space completely transformed. A new equilibrium occurs. As he progresses he lets his steps be directed by his guide, who to him is but an arm and a voice.

Five months to the day after the terrible earthquake devastated the country comes the presentation of Amour, colère et folie, the best-known novel by the Haitian writer Marie Vieux- Chauvet, adapted here for the stage by the playwright José Pliya.