Montreal, 27 January 2021 — Festival TransAmériques is delighted to announce the appointment of Martine Dennewald and Jessie Mill, who will take over the artistic direction of the Festival together. Following in the footsteps of Martin Faucher, who is leaving his position as head of the organization at the end of the 15th edition this spring, they will take up their duties this summer, starting with the curation of the FTA’s 2022 edition.

After a rigorous selection process, a committee overseen by the FTA’s board of directors decided in favor of Martine Dennewald and Jessie Mill as joint artistic directors, on account of their commitment to leading the organization in a spirit of dialogue as well as their coherent and daring curatorial vision. Together, they will question Quebec’s place in relationship to the world and re-engage with artistic communities in the three Americas, from Alaska to Tierra del Fuego by way of Amazonia. Their work will be shaped by inclusive, egalitarian practices for arts organizations, where mutual trust lays the ground for risk-taking and audacity.

“On behalf of the board of directors, I am proud and excited to see Martine Dennewald and Jessie Mill take over the artistic direction of Festival TransAmériques. Following the trail blazed first by Marie-Hélène Falcon and then by Martin Faucher, they will breathe new life into the unique mission of the largest dance and theatre festival in Canada. Their diverse and complementary professional experiences have led them to develop a bold and inspiring artistic and intellectual vision for the Festival, and I look forward to many years of compelling festival programs with exciting artistic work from here and elsewhere. I can’t wait to share the enthusiasm that these appointments have generated with the festivalgoers and the Quebec arts community.”
— Charles Milliard, chair of the board of directors

The selection committee, headed by François Forget, consisted of Anne-Marie Cadieux, Angélique Willkie and Charles Milliard, members of the FTA’s board of directors and Marcelle Dubois.

After studies in dramaturgy in Leipzig, Germany, and a masters’ degree in arts management in London, UK, Martine Dennewald worked for theatres, such as Künstlerhaus Mousonturm in Frankfurt, and for performing arts festivals in Luxembourg, Germany, the UK, Hungary, Switzerland and Austria.

From 2015 to 2020 she was the artistic director of Festival Theaterformen, a two-week performing arts festival held alternately in the German cities of Hannover and Braunschweig during the summer. Determined to communicate with international artists as easily as possible, she speaks eight languages fluently.

“I am thrilled to be given the opportunity to co-direct the FTA with Jessie Mill. After years of meeting in performance spaces all around the world and sharing our reflections on dance and theatre, we will now finally be able to put these thoughts into action. During my time as artistic director of an international festival in Germany, I have increasingly collaborated with artists from outside Europe and developed decolonial practices for arts institutions together with my team. With a number of projects presented at Festival Theaterformen, we have aimed to take a critical distance towards Europe, questioned the Festival’s role as a tool for interpreting the world around us, and done our best to create fertile relationships between artists and audiences. I’m very curious to see how we can put these networks and approaches to the test in a Quebec context, and to discover the work of the dance and theatre communities in Tio’tia:ke/Mooniyang/Montreal.”
— Martine Dennewald 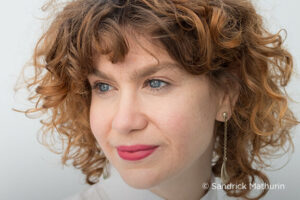 As dramaturge and artistic advisor for Festival TransAmériques since 2014, Jessie Mill has extensive knowledge of Quebec dance and theatre and their relations to the global performing arts landscape which she has been exploring for over fifteen years.

She is in close exchange with local theatre and dance communities, supports artists in their creative processes, teaches and writes regularly about performance, in particular for the cultural magazine Liberté whose editorial board she is on. She has also collaborated since 2012 on a number of projects with the pan-African festival Les Récréâtrales which takes place in Ouagadougou, Burkina Faso.

“The very notion of a shared artistic direction is a first step toward achieving what we wish to embody at the Festival. It involves a radical kind of listening and hospitality, a determination to engage in conversations that will shift our perspectives, that will transform us. All around the world, there are incredible reservoirs of imagination that our habits and market forces have made us neglect.The performing arts, in their intimate relationship with the here and now, have never been so vulnerable, and yet we need them now more than ever. Curating a festival of dance and theatre, especially now, is nothing less than an immense privilege. I want us to take up that challenge through an ethics of sharing and abundance, by embracing the needs and intuitions of the artists and the curiosity of our festivalgoers.”
— Jessie Mill