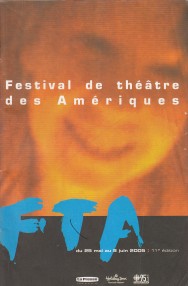 Composed of video performance, art installations, sound happenings and poetry, the works of Benoît Lachambre extend beyond conventional boundaries of art to ask questions that constantly stretch the limits of choreography. A radical admixture of several forms of artistic language, his work is that of a multifaceted artist for whom the unusual is the norm.

The title is a composite of three words: bio from the Greek bios, meaning life, plus the Greek word for writing graphia and the Arabic work for shit, khara. Biokhraphia is thus a biography of shit. Indeed, is not autobiography, in the theatre or elsewhere, nothing but lies and/or manipulation? Is identity not somewhat of an illusion or a deception? Who am I? Just what are we talking about when talking about me?

Delinquent and offensive, the plays and novels of Jean Genet are highly theatrical. A master in the art of making a dazzling impression, an expert in the fake and the rhetorical (what better way to unmask shams and appearances), Genet would recognize himself in this irreverent, flamboyant adaptation by Danio Manfredini of his novel Notre-Dame-des-Fleurs.

A boy and a girl. They come from two different worlds, and neither is allowed into the other’s universe. But the reality of theatre is a bit more complex. At a long table that splits the audience in two, master dancer Foroud and his young female student, either mistress or muse, clash in a fiery confrontation. The man and the woman are like Iran and India, like the tension between temporal power and spiritual practice. The professor’s discipline evokes a dictatorship about to collapse in the face of passion, for in front of him the call of liberty makes itself heard by means of an elusive femininity that, like the Hindu goddess Shiva, prefers destruction to submission. Values are changing in Iran, as are the arts

Imagine a civil war, but imagine it taking place here. Now imagine that you are the other person, the one placed in a detention camp. Imagine a novel brought to life in a play that is very much attuned to its times. A man of commitment and principles, loyal to certain ideas and to certain writers, director Alain Françon continues to present works by playwrights with a sharp perception of our world, and the adroit maven of language Daniel Danis is one of them.

After Incendies, Wajdi Mouawad began work on a new play that, true to form, was a full-fledged commitment. On the edge of the Forêts, he and his team are asking questions. How far does contempt for artists and the creative arts extend? How do we reconcile creativity and the means of artistic expression that prevail in our mercantile and industrial society?

A man and a woman, both in their 80s, meet and fall in love. A simple tale. But in fact, are they not rekindling an old flame? Hadn’t they previously met somewhere else under different circumstances? Why is their love so troubling for their children? Indeed, the light at dusk is sometimes warmer and more enveloping than that of the midday sun. The passions of the night, the fears of the day, a life only half known, lives lost and regained ­ the world of the writer and mathematician John Mighton unfolds with grace and mystery.

A floating body, a painted body, the body as droplet and multiple bodies, the body is both the raw material and the stuff of dreams for the recalcitrant artist Stéphane Gladyszewski. A conjugation of visual art and performance, In Side & Aura are “experiential” and sensual works that establish a taut and vibrant dialogue between the body, matter and light.

Something’s afoot on Ontario Street! In the back lanes and seedy hotels, in tattoo parlours and in empty apartments beats the spirited pulse of life. And when you know how to look at men behind the wheel of a car, you comprehend the desire of the hunter ready to seize his prey. If you go along with the game, you will see that the street teems with theatre and that the world of prostitutes in the downtown core is equal, in terms of trouble and distress, to the most disturbing fiction.

Centred on the actress Viviane De Muynck, his peerless muse, this jewel of a play fluctuates between reality and fiction, humour and solemnity, dance and acting, magic and disillusion. The room in question harbours a secret, a lie that has dominated Isabella’s entire life. A veritable recycling firm, Lauwers’ hurly-burly theatre is chock-full of exotic objects that are the lifeblood of a century-old legend. Dance, theatre and music are all called upon and employed with a light, passionate touch. The art of this unclassifiable artist is captured in multilevel writing that keeps the audience in a state of turmoil.

There can be no scruples when it comes to sex or to the stage. A rising star of new dance in Quebec, Dave St-Pierre has made a big impression with this work. It features, from A to Z, an alphabet of the forbidden and the unspoken, aggressions and transgressions. In a world where an exposed breast is considered more obscene than the death of hundreds of civilians broadcast on television, where the body is taboo but corruption commonplace, the choreographer dares to display bodies and souls. He puts the ugly, the weak and human misery on parade and constantly asks the question, What is pornographic?

Caviar and sora no longer suffice. A renowned chef thus decides to cook even rarer ingredients to entice her hip clientele, while her lover desperately tries to win her back under the probing gaze of a journalist thirsty for sensationalism. In a series of short tableaux rife with truculent humour, Pascal Lafond presents a cruel metaphor on the seductive hell of our contemporary world, where consenting flesh marches smilingly toward catastrophe, where prey and predator roam solo through this satiated world of ours.

Movie producers are hiring unknowns to tell their tales. Trafficking in the life stories of the unfortunate for voyeurs eager for more reality TV is the shock treatment provided by the English writer Martin Crimp. This mercenary world where art is bought and sold on the multicultural streets of New York is the meeting ground for some fifteen strange and fascinating characters, from the down-to-earth to the surrealistic, including a former playwright obsessed with voyeurism, a taxi driver who is an Oedipus clone in an exhilarating off-kilter America, and a black actor who ends up producing and directing the film.

How does she become a woman? How does she bring herself up unassisted and become an adult when she speaks tiny fragments of language and masters not a single one, when she’s never been anything for anyone? Her name is nobody, and she starts her life with her threadbare pockets full of hope, encountering along the way the destitute, the homeless, the unloved, the stateless. At the end of the road lie adultery, possible triumph over exile and the hope of rebirth.

LOOKING FOR A MISSING EMPLOYEE

LOOKING FOR A MISSING EMPLOYEE

Their faces are displayed in the subway and in the newspapers. They have disappeared. People are searching for them. All that remains of them is an image that does not age, misleading souvenirs of a presence that is now absent. Every day, men and women disappear in war-torn countries and in occupied territories, while those close to them wait in vain for their return. What has happened to them, to those we thought we knew but who have slipped away to another reality? On the theatre stage too lurk unreal apparitions, ghostly beings, illusions of life that nonetheless appear to be real flesh and blood.

A French citizen originally from Bénin, José Pliya imposes a violently sensual and powerfully poetic style in this play. Simple and lyrical and employing superb language, it addresses the abyss between men and women, between the past and the present. Can we ever go back home? Can we make a fresh start? Are homecomings a good idea?

After two pieces that established her reputation as an outstanding figure in contemporary art, Marie Brassard has ventured once again into the realm of the intimate and the forbidden, exploring social taboos and parallel worlds and realities, examining the invisible frontiers that keep us separate and apart, for we are, after all, irrevocably alone. What do we really know about those we are close to and think we understand? What do we know about their thoughts, their secret desires? Words can never adequately describe what we endeavour to express. We thus cannot establish true contact with others or reveal the beastly side we all conceal.

The world as it is leaves Edward Bond in a state of rage. From one play to the next, the English playwright restores power to the only weapon remaining against barbarity – imagination. The play takes place on July 18, 2077 in a world where the past has been abolished and where man is reduced to a controlled present. When he does not succumb to the wave of suicides decimating the planet, he wanders through the unspoiled, the immoral and the atrocious.

An echo chamber, a black room and a camera obscura, the room of Egyptian visual artist and videographer Amal El Kenawy allows the most intimate and poetic images to take shape and become reality. A wedding dress being sewn, a beating heart adorned with white flowers and subjected to the assaults of the needle. Yes, marriage is an attachment, making for a disturbing correspondence between the woman seen all alone onstage and the image being projected, between the real situation and its perception.