You need Flash player 8+ and JavaScript enabled to view this video.
© John Hogg

Beauty Remained for Just a Moment…

Renowned for her hilarious critiques of South African society, the choreographer Robyn Orlin turns recycling into an art in a sparkling piece full of good humour. Exhilarating.

An exuberant presenter, a self-proclaimed goddess of recycling, warms up the crowd, catching the eye with every swish of her dress as she takes us on a quest for beauty. Beauty is revealed in random exchanges with the audience, in excerpts from films about African life, in colourful dialogue and costumes made of 100% recycled materials. Beauty appears in the vitality of bodies possessed by rhythm, and in the imagination of performers who with only a word improvise an entire song.

Renowned for her hilarious critiques of South African society, the choreographer Robyn Orlin revels in the pure pleasure of revealing her love for her home town of Johannesburg. Together with the extroverted dancers of the outstanding company Moving Into Dance Mophatong, she pulls us headlong into a city where laughter and creativity are the best allies against adversity. A solid dose of good humour to revive the spirit! Exhilarating. 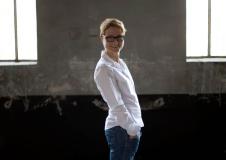 Crazy for Dance and Social Justice

Born in Johannesburg in 1955, Robyn Orlin presented her first solo work there in 1980, after graduating from the London School of Contemporary Dance. She went on to further studies at the School of Art Institute of Chicago. Integrating texts, songs, video and visual art, her theatrical, highly spirited works portray the difficult and complex realities of South Africa, generally striking where it hurts. Nicknamed in South Africa a “permanent irritation”, she won the 2000 Jan Fabre Award (one of many) in France for most subversive choreography. Her pieces are characterized by lengthy titles (e.g. Daddy, I’ve seen this piece six times before and I still don’t know why they’re hurting each other, one of her seminal works), this former anti-apartheid activist sets her sights as much on racism, poverty, AIDS, dictatorship and the failings of society as on the codes and symbols of white culture.

She has lived in Berlin for the past dozen years and has worked extensively in France, including directing two operas there. Having previously created works for museum guards, a hip-hop dancer and the members of a choir, for Beauty Remained… she collaborated with Moving Into Dance Mophatong, a leading force in South African dance and a company that has been combating segregation since 1978 with mixed casts and works that blend African traditions with Western forms.  It is also home to the leading school of contemporary dance in Johannesburg.