People used to find communion in religion, and later in mass political movements. Now we all sing in harmony, to the bitter end.

There is nothing anonymous about them. They are not a faceless crowd swarming the boards, but individuals – a real community – taking over the stage to spontaneously create before our eyes a song that, like the sirens’ song, attracts people of all classes and cultures, people who then make it their own, enriching it further in a blaze of fullness and universal harmony. The song will not die for it now has its own life. It becomes an insidious power, loved to death.

The amazing Olivier Choinière, the author of Félicité and the creator of surprising theatrical walkabouts, has assembled 50 actors to present a strange, disturbing fable, a musical comedy that is radiant and enthusiastic and ripe with the utopia of a collective communion, but one that is transformed into nightmarish conditioning that crushes those who so innocently created it. 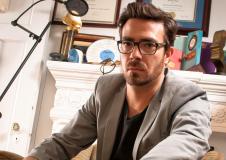 Borrowing from B movies (Agromorphobia, 2001), familiar history (Autodafé, 1999) and audioguided tours (Bienvenue à – (une ville dont vous êtes le touriste), 2005), he focuses on destabilizing the expectations of the audience in order to redefine his perception of reality. In 2000 he founded L’Activité Répétitive Grandement Grandement Libératrice (ARGGL, or L’Activité) to produce his more atypical work, including the meteorological tragedy Jocelyne est en dépression (2002), the walkabout Beauté intérieure (2003) and Projet blanc in 2011, a comment on theatre and staging of the classics craftily slipped into a performance of L’École des femmes at Théâtre du Nouveau Monde. Olivier Choinière and L’Activité are co-founders of Aux Écuries, a new centre of theatre creation in Montreal.