What happens to love when it becomes exclusive and absolute possession of the other? Haunted by the figure of the Austrian Josef Fritzl, who for 24 years kept captive his own daughter and three of the seven children born of their incestuous union, Conte d’amourplunges into the murky waters of extreme love. This gut-wrenching piece distills the audience’s malaise and sordid fascination, turning the spectators into voyeurs, witnesses almost despite themselves to an intimate nightmare imbued with a disturbing strangeness as they watch ageless children, captives of a monster father who is surprisingly familiar, play and play out again disturbing rituals. Between what is shown and what is hidden, in a context out of time, incandescent words and images pulsate throughout this tale for adults.

An explorer of the unmentionable, Markus Öhrn combines the languages of video, performance art and theatre to venture into the mined territory of contemporary ideologies. By creating a fine sublimation of horror, he tears to pieces the principle of love as he relentlessly assaults the spectator’s mind. Packs a punch! 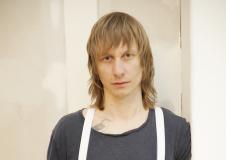 Invited for the first time to the FTA, Markus Öhrn is a prodigious renegade who abandoned the visual arts for the stage, adopting a hybrid approach that intertwines the artistic languages of theatre, performance art and video.

Now based in Berlin, this Swedish artist plunged into the world of theatre thanks to a series of decisive encounters. After creating videos for the director Anders Carlsson (who wrote the script for Conte d’amour), in 2006 he met the members of the Swedish theatre company Institutet and the Finnish collective Nya Rampen. In 2007, after many of the actors in both companies had participated in his video installations, Öhrn created the set design and the screen mechanism for Best of Dallas, a piercing satire of the archetypes of desire. Directed by Anders, it was the fruit of a new collaboration between the two groups. In 2009 that cooperation continued when the members of Nya Rampen solicited the visual artist once again, this time inviting him to direct a new play. Just as work on the new piece began, the Fritzl affair burst into the headlines and became the real-life source of Conte d’amour. Like the other plays presented by the partnership, this hypnotic piece plunges the spectator into an experience that, by suspending time and diffracting the spectator’s gaze, smashes the codes of theatricality, making the spectator a voyeur, a witness almost despite himself to the ideological excesses of our era.

IN GERMAN AND ENGLISH WITH ENGLISH AND FRENCH SURTITLES