GANESH VERSUS THE THIRD REICH

Hitler stole the swastika from India. The Hindu deity Ganesh travels to Nazi Germany to retrieve it, but his worst enemy turns out to be… the play’s director.

Hitler stole the swastika symbol from India. Ganesh, the elephant-headed god whose duty is to combat ignorance and overcome obstacles, travels to Nazi Germany to reclaim that ancient Sanskrit symbol of well-being. But what can Ganesh do about the pitfalls encountered in the rehearsal hall? The actors want to know who is to play the Nazis, whether knowledge of Judaism is required to play a Jew and, on behalf of the common good, if they must place their trust in a tyrant – the director.

Ganesh Versus the Third Reich asks, in playful, poetic and political fashion, burning questions about cultural appropriation, the right to portray the other and the power relations of everyday life. This work of rare and novel beauty, often surprisingly funny and always very moving, owes its grace to those who created it, the mentally handicapped actors who are members of an Australian company that lets their voices be heard. Authentic. 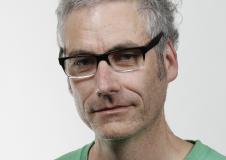 BRUCE GLADWIN (MELBOURNE)
BACK TO BACK THEATRE

From Outsiders to Creative Artists

Back to Back Theatre was founded in 1987 in the southeastern Australian town of Geelong (near Melbourne), its mission being to create theatre with people who are identified as having an intellectual disability.

Using their unique position as outsiders to cast a discordant gaze at society, the members of Back to Back Theatre explore through theatre the points of friction between economic exploitation and humanism, between the social and the artistic, between the legitimate needs of individuals and the tyranny of normality. Consisting of five full-time actors, the company has been headed since 1999 by the director Bruce Gladwin. Favouring a long-term creative process based on improvisations with the actors, Bruce Gladwin and his company have more recently developed a radical theatricality by focusing on the real issues underpinning the performances, adopting an aesthetic of visual poetry and a continuous seesaw between what is performed and what is represented.

Four recent major works by Back to Back Theatre — soft (2002), small metal objects (2005),Food Court (2008) and Ganesh Versus the Third Reich (2011) — have made the company internationally renowned, and over the past decade the troupe has performed in more than 50 cities and in major festivals around the world.

IN ENGLISH WITH FRENCH SURTITLES

We use cookies to analyze our website traffic and personalize our content and ads. These cookies are secure and don’t contain sensitive information. If you are not comfortable with us using this information, please adjust your browser settings before continuing your visit. I understand