A UFO-like constellation of some 30 vintage radios hovers above the stage in Heart As Arena. Receiving broadcasts from transmitters onstage, they form an electromagnetic epicentre where human relationships are expressed as static, silences and love songs. Engaged in a fiery embrace with radio waves as they decode the secret language of the heart, the dancers become homing devices tuning in to the right frequencies, revealing the invisible structure of terrestrial networks, metaphors for the mysteries of love. Electric energy courses through at warp speed, zapping a few victims in passing. Hearts race in breathless excitation, and hearts break. Interference jams reception of the signal. Few end up on the same wavelength.

After juxtaposing live movement with animated projection in Smash Up (FTA, 2008), the Vancouver dancer and choreographer Dana Gingras joined forces with sound designer Anna Friz to choreograph energy, tracing a surprising parallel between the mechanics of human encounter and the mechanics of energy. Physical physics.

PREMIERED AT THE CULTCH, VANCOUVER, OCTOBER 4, 2011 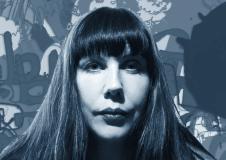 A choreographer and dancer for more than 20 years, Dana Gingras changed the landscape of Canadian dance with her company The Holy Body Tattoo, co-founded with Noam Gagnon in Vancouver in 1993. For almost 15 years they presented works characterized by intensity and demanding movement, and their 1996 piece our brief eternity received a Dora Mavor Moore award for best ensemble performance. Eager to pursue a dialogue with multimedia and to do more work with film, and also to be clear of rising expectations on the part of critics and audiences, in 2006 Dana Gingras founded a parallel company, Animals of Distinction, which soon became her main focus.

Commissioned by and presented at the FTA in 2008, the series of solos and duos entitledSmash Up combines dance and animated film with intelligence and originality. It led to the short films Aurelia and Double Bubble, which were produced by Bravo television, as was the dancer-with-bear duo Dances for Dzama. An associate dance artist at the National Arts Centre of Canada, this ardent film buff also produced the video installation What is Mine is Yoursbefore creating Heart As Arena in 2011 and New Animal for The 605 Collective.