The great Marie Chouinard embodies the dreams that visitors of the Museum of Fine Arts confide in her. This intense and memorable encounter is truly a gift.

Everything is white: the dance floor, the props and even her clothing. In this sacred space at the heart of the Museum of Fine Arts, Marie Chouinard embodies the aspirations that visitors secretly confide in her. She transforms movement into a shamanistic language. She connects to those who have come to whisper their wishes in her ear, lets a prayer rise out of her body, and writes it out invisibly in the hope that the message will be heard. The audience watches – intrigued, enchanted and astonished – perhaps looking to solve the mystery of these ephemeral dances. Together with the dancer, the audience will experience the immediate wonder of an absolute presence.

Returning to the stage after a 20-year absence, this great Québec choreographer abandons herself to dazzling spontaneity for these custom-made improvisations. Moving quickly between frenzy and contemplation, gravity and humour, she offers us the rare opportunity of direct contact with the artist. This intense and memorable encounter is truly a gift.

PRESENTED IN ASSOCIATION WITH MONTREAL MUSEUM OF FINE ARTS 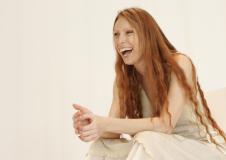 Exultation of the body and soul

Born into a family of artists in Quebec City, Marie Chouinard enjoyed a solo career for 12 years before founding her company in 1990. Her first creation, Cristallisation, danced to the sound of a broiler oven, propelled her to the ranks of the most exceptional creative artists. A charismatic dancer constantly seeking authenticity, she has pushed boundaries without regard for the public’s reaction and made headlines for urinating on stage (Petite danse sans nom, 1980) and masturbating (Marie Chien Noir, 1982). Revelling in the raw and luminous poetry of instincts, she has created organic and often very explicitly sensual dances, such as L’après-midi d’un faune (1987). Presented during the Festival de théâtre des Amériques, Les trous du ciel, her first group work, was hailed as a revelation. The piece features her signature use of breath, voice and undulations of the spinal column. Major works from her repertoire such as Le sacre du printemps (1993), Les 24 préludes de Chopin (1999) and bODY_rEMIX/les_vARIATIONS_gOLDBERG (2005) are still touring, as is ORPHÉE ET EURYDICE (2008, FTA coproduction); meanwhile, major ballet companies are remounting some of her creations.

Marie Chouinard has always been a multi-disciplinary artist. She has created over fifty choreographies, two art films and a poetry anthology. She has produced eight installations or exhibitions and given several performances of In Museum, notably in 2012, in Baie Saint-Paul. Three years earlier, she had returned to the stage with the solo piece, gloires du matin :)-(:, performed at dawn in unusual settings in Montréal, Venice and Vienna..