The childhood (zero to age seven) of a middle-class American girl is presented as a modernist musical. An ode to the mundane that is utterly winsome!

An actress thrashes and struggles. She smiles, she bewilders. Her movements are a strange sort of rhythmic gymnastics, and the simple live music accompanying her gestures surprises. Soon there are six people onstage, dressed in grey uniforms, singing along with her the tale of one existence. Based on absurdly disproportionate source material, it is a minutely detailed narrative, a 34-year-old American woman’s life story recounted in 16 hours of telephone calls. The surprising treatment wins over the audience – the unpolished narrative punctuated with digressions and hesitations, set to music and sung in the image of a musical. This ode to the mundane, coupled with a critique of hyper-mediatization and of TV reality stars, is a new form of musical, disconcerting yet also winsome.

With Life and Times – Episode 1, the Nature Theater of Oklahoma, an adventurous New York theatre company, is back at the FTA following its memorable 2009 presentation of Rambo Solo. The new piece relates the childhood (zero to age seven) of Kristin Worrall in a captivating portrait of a generation. 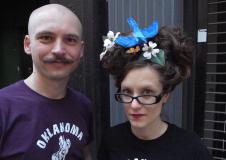 Off-off-Theatricality
Kelly Copper and Pavol Liška met during a Dadaist theatre class at Dartmouth College, New Hampshire. A couple both in life and onstage, they have presented several works over the past fifteen years. In 2003 they founded the Nature Theater of Oklahoma. The company takes its name from the mysterious troupe in Kafka’s unfinished novel Amerika that promises work in their theatre for everyone. Their “off-off-Broadway” theatre constantly questions the limits of theatricality by placing everyday life onstage and masking it with theatrical devices. The playful, eccentric and often critical result combines artificial constraints with observations of banality. Liška and Cooper refuse to set a definitive version of any piece, leaving a lot of room for randomness and uncertainty in performances, thus obliging the actors to be fully available to the story and to the moment.

Life and Times – Episode 1, presented for the first time in Vienna in 2009, is the starting point for a musical saga that will eventually consist of 10 episodes, all using as their source the telephone recordings in which Kristin Worrall answer the simple but so vast question Liška asked her: “Tell me your life story”. In the past few years the company has created other shows based on sound recordings: No Dice (2007), Romeo and Juliet (2008) and Rambo Solo(FTA, 2009).

IN ENGLISH WITH FRENCH AND ENGLISH SURTITLES