After the electrifying Alexis. Una tragedia greca and Too Late! (antigone) presented in 2012, Motus is back in Montreal with theatre designed to trigger new political actions.

During spring 2012, at the height of the city’s civic unrest, the Italian company Motus electrified FTA audiences with Too late! (antigone) contest #2 and Alexis. Una tragedia greca – theatre with explosive political energy. Fascinated by the vitality of a city where protesters marched nightly to change the social order, Motus is returning to Montreal to create and invent a form of theatre that will lead to new political actions. Such is the challenge of this creation based on Shakespeare’s The Tempest and civic movements around the world

“Where is the master?,” cry the panicked passengers. What if this storm was the one that we are currently experiencing, as our unsettled financial economy hurtles us towards the shore? Shipwrecked on an island, surrounded by the debris of globalization and recycled material newly invented by dissident engineers, we find ourselves– actors and audience – invited to join together and build the architectural prototype of an open utopia.

PRESENTED IN ASSOCIATION WITH CINQUIÈME SALLE 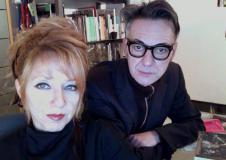 Theatre as a training camp for utopia

The presentation of Too late! (antigone) contest #2 and Alexis. Una tragedia greca during the 2012 FTA while, every night, protesters were transforming the streets of Montreal into roads towards utopia, showed to what extent the Italian company Motus was not only keenly aware of the turmoil of the times, but also an active participant in this movement to resist dehumanization. Founded in 1991, in Rimini, by Enrico Casagrande and Daniela Nicolò, Motus quickly established itself thanks to its unique – active – view of today’s world, its ability to band together artists and stakeholders from various backgrounds, and the protean nature of its artistic endeavours. These, which revolve around theatre, manifest themselves through videos, symposia, architectural essays, installations, performances, workshops, and social actions.

Whether the subject is hotel rooms (as with the Rooms project, whose Twin Rooms was presented in Montreal in 2005), Fassbinder’s Anti-theater, adolescent distress (which led toX(lcs) Racconti crudeli della giovinezza, 2007), or the figure of Antigone, Motus takes on these themes and motifs and turns them into fields of investigation where the words of writers, including Pasolini, Genet, Sophocles, Brecht, and Shakespeare, serve to question today’s movements in a vertical manner. Nella tempesta is part of a cycle initiated in 2011 on the current crisis seen through the tension between dystopia – anti-utopia – and utopia, i.e. the dream of the common good.

IN ITALIAN WITH ENGLISH AND FRENCH SURTITLES