Syria, 2011. In the streets, right in front of the eyes of the entire world, men are shot down and film their own deaths. Images of a revolution. Revolution of the image. A captivating theatrical lecture.

WAR OF IMAGES
Syria, 2011. Armed with cameras or cell phones, thousands of angry demonstrators opposed to the stifling regime of Bachar Al-Assad pour into the streets. In the chaos and turmoil of clashes with the authorities, they shoot on the fly, recording the event they are creating. With a quick click, breathtaking, startling images appeared on the Internet and then went viral, revealing to the entire world the maelstrom of political and digital resistance. The situation then deteriorated, resulting in a massive increase in the number and virulence of violent attacks, and the images became unbearable. Caught in the sights of snipers, men were shot down, filming their own deaths up to the very last second.

Alone onstage, fluctuating between the serious and the surprisingly playful, the far from tranquil Lebanese artist Rabih Mroué dissects and questions disturbing images of the Syrian revolution and the mechanics of their fabrication. A captivating lecture-performance that plunges into the heart of the violent upheavals of news stories being written and recorded as they happen.

THIS EVENT IS PART OF PRINTEMPS NUMÉRIQUE 2014 DE MONTRÉAL. 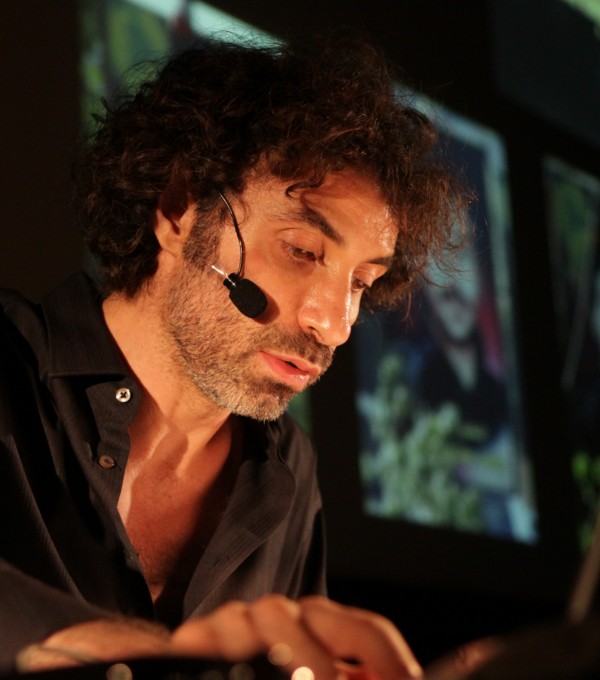 At the Crossroads of the Personal and the Political
Born in Beirut n 1967, Rabih Mroué has developed a versatile artistic practice where he assumes, often simultaneously, the duties of actor, director and playwright. Since 1990 he has developed, solo or in tandem with his artistic colleague Lina Saneh, striking performance pieces that blur the boundaries between disciplines in a poetic fusion of theatre, installations, performance art and video. They present works that are a direct reflection of the social and political realities of their country, as they dig into the questions and contradictions underlying Lebanese society. In an unexpected intermingling of documentary and fiction, notably with unclassifiable lecture-performance pieces such as Make Me Stop Smoking (2006) or The Inhabitants of Images (2008), they turn reality into narrative.

An iconoclastic artist whose pieces constantly question the limits of representation, Rabih Mroué places humanity at the heart of his work. Intertwining the private and the political, his troubling and disturbing pieces have been acclaimed at major European festivals, including the Avignon Festival. In 2005 he presented Looking for a Missing Employee at the FTA, a meticulous theatrical investigation of the phenomenon, widespread in Beirut, of people who have disappeared without a trace. With Lina Saneh he also presented Biokhraphia, a fierce yet playful autofiction. This year the duo will be presenting 33 tours et quelques secondes at the FTA, a radical theatre performance devoid of actors, a piece that probes the doubts and uncertainties of Lebanese society in the post-Arab Spring period.