This magnificent lesson in insurrection is full of striking imagery and performed by an incandescent duo carrying the torch handed down by Antigone.

In an incandescent face to face encounter, two actors ruthlessly confront each other. Father and daughter, the dissident and the ruler, the dog barking angrily at its master. Too Late!(antigone) contest #2 is a disturbing allegory of contemporary political and economic upheaval and a plea for justice and humanity, as well as an extraordinary theatrical laboratory. This terrible play is presented in close quarters. The audience is seated at stage level and in fact encircles the stage, inexorably becoming part of the proceedings.

There is Antigone, a pacifist warrior and a symbol of rebellion with a touching code of fraternity that no threat can undermine, and then there are Creon and his son Haemon. These characters reworked by Brecht have inspired the poetic mavericks of the Italian company Motus, who are also presenting at the FTA Alexis. Una tragedia greca, which explores themes similar to those of Too Late! (antigone) contest #2. The play raises an important, vehement and visceral question. Is it too late to rise up and change the course of events?

PRESENTED WITH THE SUPPORT OF INSTITUT CULTUREL ITALIEN DE MONTRÉAL 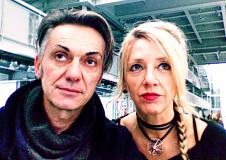 Artists Without Borders
For the Italian company Motus there are no borders, no frontiers between countries or eras or disciplines, no separation of art from involvement in society. Free thinkers who have performed all over the world, the playwright Daniela Nicolò and the director Enrico Casagrande, who founded Motus in 1991, combine video, installations, poetry and dance in their theatre. They also integrate well-known works such as Jean Genet’s Splendid’s, Pier Paolo Pasolini’s Teorema and Rainer Werner Fassbinder’s Preparadise Sorry Now into thoroughly contemporary productions where artistic innovation and taking a political stance are one and the same. The originality and quality of the Motus oeuvre have earned the company a number of honours, including the prestigious Ubu Award for their Rooms project. The Italian actress Silvia Calderoni, who has been working for Motus since 2006, recently received an Ubu Award as best new actress under 30.

The company was in Montreal in 2002 with CRAC, and back again with Twin Rooms in 2005. This year the FTA will be featuring their new piece Too Late! (antigone) contest #2,as well asAlexis. Una tragedia greca, both of which are part of the Syrma Antigónes quartet, the other two being Let the Sunshine In (antigone) contest #1andIovadovia (antigone) contest #3.Created between 2008 and 2010, the series is a contemporary reflection of the spirit of Antigone, a symbol of integrity and of the revolt in contemporary societies against uncaring or corrupt authorities.

IN ITALIAN WITH FRENCH AND ENGLISH SURTITLES