The performance artist Dana Michel plays with stereotypes of black culture in order to sink her teeth into embodying a strange creature in a disconcerting ritual. A figure of the Montreal underground scene well worth discovering.

As a child, Dana Michel would drape a yellow towel on her head so she would resemble the blonde girls at her school. As an adult, she revisits the imaginary world of her other self in a ritual performance without cover-ups or censorship. With a blend of gravity and buffoonery she digs into the stereotypes of black culture, turning them upside down to see what is revealed. From these deep memories a strange creature slowly emerges, and it adjusts to its surroundings in a slow and disconcerting metamorphosis that the audience follows with fascination

Initially attracted by the aesthetics of fashion, video clips, queer culture and comedy, Dana Michel soon made her mark as an emerging dance artist. With Yellow Towel, which she has been developing in Vienna, Brussels, New York and Toronto, she explores new territories of creation and most decidedly asserts herself as an artist to watch. A figure of the Montreal underground scene well worth discovering.

PREMIERED AT FESTIVAL TRANSAMÉRIQUES, MAY 24, 2013 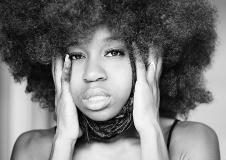 Marginal and to the Max

Originally from Ottawa, Dana Michel switched from marketing to dance at age 25 after attending several raves. A former competitive athlete (track and touch football), she obtained a Fine Arts degree in contemporary dance at Concordia University and later founded a dance company named Band of Bless, in honour of the physical and emotional injuries that inspire her work. In 2005 she made her début with her award-winning solo the greater the weight. The following year The Globe and Mail named her Best Emerging Choreographer, and for three years in a row she was in the Top 10 Choreographers listing of the Montreal weekly The Mirror. She has performed her work in Europe and in North America.

The atypical spaces used in events where she performed with the collective Wants&Needs (Short&Sweet, FTA 2011) are well suited to her marginality and her questioning of gender codes and sexual duality. Her initial works dealt with androgyny, hypersexualization and machismo. They are characterized by strong hip movement, athletic gestures and collaborations with musicians from the electro scene such as Ghislain Poirier and Yelle, and reflect her taste for the highly stylized aesthetics of music videos. An assistant director, dramaturge and performer in one of the first video installations at Place des Arts, she explores new territories with the more interiorized and minimalist dance of Yellow Towel.