#2 – Writings of reality, a plural self

“Reinventing oneself”: a phrase that has become all too familiar to the cultural sector for close to a year now. How many times has it been asked to renew itself to sustain an entertainment economy, to the detriment of long-term artistic research?

The FTA Breathing Space was conceived in response to these new circumstances; it supports both works in progress and the processes of creation. Three artists in particular, with whom the FTA has been conversing with for some time, have immersed themselves in an open-ended artistic process favouring exploration and experimentation.

Each in their own way, Anne-Marie Guilmaine, Marilou Craft and Sophie Gee have taken the path of writing to explore their own theatrical practices. By rediscovering themselves, they remind us of the true meaning of “reinventing ourselves” and reveal the value of long-term work.

Stage, (re)writing and score: the trajectory of Anne-Marie Guilmaine 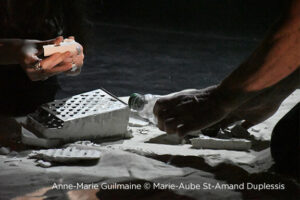 Co-Artistic Director of the company Système Kangourou, alongside Claudine Robillard, Anne-Marie Guilmaine has long been involved in theatre. Beginning with the staging, she weaves a dramaturgy of reality in which bodies in action serve as the starting point. Since receiving her Master’s degree in literature in 2015, she has sought to detach herself from directing in order to focus on the writing of an autonomous text fueled by her work as a stage actress.

Her project currently underway, Bermudes (dérive), provides fertile ground for her research. Echoing the work of Claire Legendre, it features a teenage choir and two performers, Mika Pluviose and Bob Smith. Since the latter lives on Anticosti Island, the team cannot meet as regularly as it would like, especially with the pandemic. The interludes between each of the explorations has thus allowed Anne-Marie Guilmaine to set down on the page what she has observed in the rehearsal studio. By appropriating the personae of the performers, she makes reality drift in response to her own imagination, creating a framework in which the real and the fictional are intertwined. The resulting figures thus no longer fully correspond to those that gave them birth.

Motivated by the presence of the performers, she creates a literary object that can then be reincarnated on stage. What new drift can she expect after her words reach the performers? Can they exist both on stage and on paper? Anne-Marie Guilmaine is fascinated by this constant back-and-forth between writing and theatre, by this “relay race of subjectivities.”

“On the floor of the stage, there is now a winter coat, a pair of boots, an unmanageable puddle, unrecognizable objects made of metal and plastic, and numerous fragments of plaster. Mika, whose feet are bare, will have to be careful not to hurt herself. The tarp covers an imposing shape stage left.

The stage undergoes a metamorphosis, becoming spotted and grimed. It is time to completely appropriate it, to discover what remains concealed.”

(Excerpt from the working text)

With the help of her dramaturgical collaborators Claudine Robillard and Mélanie Dumont, Anne-Marie Guilmaine will have the opportunity to pursue her writing during a creative residency at La Chapelle Scènes Contemporaines from February 11 to March 7. The text arising from this process will be the subject of an audio project headed by musician and sound designer Frédéric Auger. The Sherbrooke actress Jacinthe Tremblay will narrate it, while actors Mika Pluviose and Bob Smith will play the “characters” they inspired.

Marilou Craft: the breath of life

Marilou Craft has been developing her writing practice for some time, spurred in particular by her work as a dramaturgical consultant. For the most part, she has created short works and opinion pieces, some of them commissioned. Her works have appeared in the journal Moebius (2018), in the collections Cartographies II: Couronne Nord (La mèche, 2017) and Corps (Triptyque, 2018), as well as on various media platforms (Urbania, La Presse+, Percées). 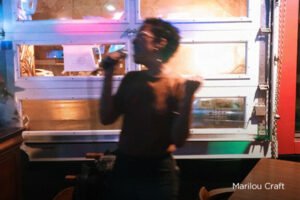 Marilou Craft now wishes to engage in a more personal process as an author. She plans to publish a manuscript, and above all to reflect on the ways in which her words can be disseminated in a performance context. Having presented her writings at public readings, launches and on the radio, she now feels the need to explore the voicing of her words. Unlike Anne-Marie Guilmaine, her starting point is the textual material, which then leads to the stage.

Her writing, moreover, is infused with an orality that lends itself well to performance. Punctuated by ellipses, repetitions and silences, she evokes more than she says; she seeks to stimulate the senses, reflected in the body of the subjects she approaches. The author invites a somatic reading of concepts such as weathering, which conveys the long-term impact of mental trauma. She explores, for example, the possibility of inducing a feeling of exhaustion in her audiences through the mechanisms of gaslighting, a form of psychological manipulation aimed at making a person doubt their own perceptions. These phenomena commonly occur among marginalized communities, which Marilou Craft attempts to reveal with her pen.

Her approach is also reflected in a recording by Live in Concrete. The author performs an excerpt from Veiller le souffle, an intimate text born in response to the death of George Floyd last May, which will be published in a collection by Tryptique next year. Musician Elyze Venne-Deshaies has composed the soundtrack of this vocalization, music being central to Marilou Craft’s artistic research. Both artists have also composed an album between spoken word and instrumental music, which features the full version of Veiller le souffle. Now equipped with a microphone and loop station, Marilou Craft is continuing to explore solo voice work in order to create different sound textures and add layers of meaning to her writing.

Director Sophie Gee is in the process of rewriting an existing text, Jean Genet’s Les Bonnes (1947), with the idea of questioning her own Chinese-Canadian identity. Alongside three collaborators of Chinese origin (Angie Cheng, Winnie Ho and Claudia Chan Tak), she is interested in the racism she internalized at a young age while living with both her Chinese family and Western society. As she now witnesses China’s economic rise, Sophie Gee revisits her complex relationship with her cultural heritage.

Her adaptation of the play by Genet, a fable recounting the tragic destiny of the sisters Claire and Solange, both servants to Madame, a member of the haute bourgeoisie. Trapped in their social position, the maids become jealous of their mistress. Claire ends up intentionally poisoning herself while playing the role of Madame, thereby symbolically murdering her. By giving all three characters a Chinese origin, Sophie Gee contrasts white education and luxury on the one hand, and the precarious situation of rural immigrant workers on the other. Little by little, the maids understand that China is now supplanting the West as a new capitalist and colonialist force. Envy becomes pride; Madame is now only a pale image of success in their eyes.

Sophie Gee is here revealing her ambiguous love of Chinese culture, questioning the power systems that control global markets. Driven by her personal experience as a non-white woman, this type of political engagement characterizes her work as a director, as evidenced in Habibi’s Angels: Commission Impossible, written by Hodra Adra and Kalale Dalto. Produced by Talisman Theatre and webcast on December 2 and 6, 2020 by La Chapelle Scènes Contemporaines, the play was a critical, feminist celebration of “diversity” in Montreal.

“What happens when you are a racialized artist and you are approached to work on a project because you are an ‘artist of color,’ as opposed to your body of work?”

During a creative residency at the Théâtre Aux Écuries in the fall of 2020, Sophie Gee was able to complete the initial phase of exploration with her collaborators. She is currently devoting her time to writing and research in preparation for her second residency in April.

On different levels, these three women are rethinking their relationship with the stage and reality to attain a new, unsuspected dimension in their work. While writing is known for its solitary nature, these artists show, on the contrary, that it enables a meeting with the Other, as well as the self. Through the word, our presence is materialized; through the breath, our sensations are translated; and through the spectator, relationships are woven.

The writing of Anne-Marie Guilmaine, Marilou Craft and Sophie Gee is evolving with each collaboration, and will eventually find audiences all their own. For now, let us wait for them to unfold…