Through its ongoing dialogue with local and international communities, the FTA seeks to shed light on the world around us and the issues we face.

From a political perspective, it works with artists whose varied approaches aim to dismantle commonly accepted views and to stimulate reflection. Focusing on the margins of society, on the cracks and crevices of reality, some of these artists are rooted in processes that question, among other things, notions of hierarchy, freedom and collaboration.

For the final blog post of Breathing Space 2020-2021, I wanted to highlight three projects that are deeply ingrained in a logic of provocation as a means of reinventing norms. These works by Sovann Rochon-Prom Tep, Ellen Furey, Malik Nashad Sharpe and the company projets hybris are certainly distinct, but they all reflect an urgent need to reconfigure current practices and assumptions.

FTA audiences were able to discover the work of Sovann Rochon-Prom Tep, alias Promo, thanks to his show Un temps pour tout, presented at the FTA in May 2021. With a background in hip-hop and contemporary dance, the choreographer and dancer aims to destabilize existing codes of representation by provoking encounters among diverse artistic and cultural communities that he views as being equals.

For his new piece Sam & Angèle, which will make its début at La Chapelle Scènes Contemporaines in March 2022, he will be working with Samantha Shayla Hinds, a master of hip-hop and waacking (a dance style born in the gay clubs of the 1970s that involves moving the arms to the rhythm of the music), and Angélique Willkie, a teacher, dramaturge and dancer. By means of physical and vocal improvisations, the choreographer uses the personal experiences and interests of the performers as an inspiration for his approach. He seeks to neutralize the power relations present in the performing arts so as to encourage more collective forms of creating art.

The choreographer values anything that deviates from the norm, often choosing unconventional performance venues and rethinking how spectators are welcomed.

For Sam & Angèle, the audience is invited to enjoy some homemade soup and to wander through a museum type installation piece by the visual artist Laïla Mestari, a fusion of collages, wooden structures, photos and videos. The warm, inviting ambience inspires confidence and helps spectators to be drawn into the work. Fixed on a self-supporting frame, the lighting design by Étienne Fournier adapts to any room so that the piece can be presented easily in all sorts of venues.

Sovann Rochon-Prom Tep enjoys toying with expectations, in particular by having the performers engage in playing on multiple levels, portraying the plurality and malleability of identities. The real and the fictitious coexist onstage, blending together in multiple forms (at times grotesque) of identity expressed without artifice. The choreographer goes back to basics, relying on the human element to present a more artisanal performance model. 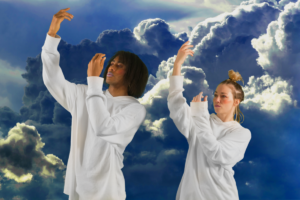 Sovann Rochon-Prom Tep’s need to express and champion the fluidity of identity is also apparent in the aspirations of the dancers and choreographers Ellen Furey and Malik Nashad Sharpe, alias Marikiscrycrycry. At the crossroads of pop culture and the esoteric, their joint approach promotes a pluralist aesthetic that is opposed to a dull generalized blandness. That was also evident in their piece SOFTLAMP.autonomies presented at La Chapelle in 2018.

Their second dance duo HIGH BED LOWER CASTLE explores plural identities in a series of non-linear tableaux. As its title suggests, the work places greater emphasis on individual experiences of sexualization (high bed) than on roles defined by the patriarchy (lower castle). This call for the eradication of stereotypes is reflected in a mixture of artistic styles. Employing poetic declamations and operatic singing, folk melodies and hip-hop music, Ellen Furey and Malik Nashad Sharpe cause different worlds to intersect, turning audience expectations upside down.

The duo revamped the aesthetics of fairy tales about princes and princesses, blurring identities. With invisible brushes they sketched a fictitious world dominated by characters from a reinvented monarchy.

Objects associated with magic and witchcraft, such as a rat figurine, a wooden stick and a large scroll, inhabit the otherwise bare stage. The golden castle of Ellen Furey and Malik Nashad Sharpe is built upon our archetypal stories, pushing the limits of our imagination.

Alternating between ballet, virtuoso performance and improv, Ellen Furey and Malik Nashad Sharpe extrapolate the possibilities of dance, revelling in disobeying conventions. From one contrast to another, the dancing bodies respond to each other, oppose each other and erase each other until they are spent. That physical effort mirrors the cost of complying with social and political structures that constantly oppress gender and sexual identities. Defined as immersive choreography, HIGH BED LOWER CASTLE stages new narratives based on powerful solidarity.

Echoing that approach, projets hybris takes multiple realities into consideration not only in its works, but also during the creative process. In the series L’espace de l’art released by Savoir média, the interdisciplinary company cites the feminist Donna Haraway and the idea that it is our duty to reinvent collective narratives to make them more inclusive.

projets hybris is a Montreal collective that defines itself as a non-hierarchical queer and feminist company. Each piece is created collectively based on improvisations, in-depth discussions and an evolving bibliography. The FTA has collaborated with the company on several occasions, and presented Bibliothèque vivante du queer at the Festival in 2019, a piece where each invited member of the collective presented key works of the moment. 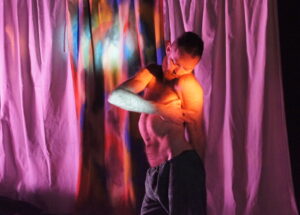 For the past three years the company has been working on a new interdisciplinary piece, cruel·le, that denounces the impact of capitalism on mental health.

Given that exploring that theme might at times prove to be a trying and vulnerable experience, projets hybris shifted the focus of the project over the course of the year in order to place the emphasis on care, while bearing witness to the complex realities inherent to mental health problems.

Between intimate revelations and humorous anecdotes, the different collaborators involved consult each other on ways to improve the piece. The approach to creating the play (whose title has yet to be defined) is decidedly full of light and benevolence. The team got together at La Chapelle in June 2021 to outline the basic structure during a creative residency supported by the Montreal Arts Council, in association with the Regroupement des arts interdisciplinaires du Québec.

The works by Sovann Rochon-Prom Tep, Ellen Furey, Malik Nashad Sharpe and projets hybris explore marginal spaces and the quashing of differences. In addition to criticizing existing political and social systems, these interdisciplinary artists aim to present other types and forms of representation.

Through their work exploring the limits of the possible and deconstructing patterns of imagination, they support a positive vision of sexual, gender and body diversity, subverting the norms and conventions of not only the cultural sector, but those of capitalism and the patriarchy as well.

By making a donation, you'll directly support the FTA Respirations.