It’s here, all sheepish and confused, wandering around somewhere in my home where I’m now a recluse. It’s on the dining room table, which has suddenly become a war zone where all battles are fought – professional, existential, domestic.

It’s definitely here, with its 120 pages of words, photos and promises, buried at times under a spectacular pile of files and unruly paperwork that seems to have popped up out of nowhere. And then presto, as if by magic it reappears stuck between a plate full of bread crumbs, my Tintin and the Temple of the Sun coffee mug and my indispensable computer, that allows me to take part in virtual meetings where we talk about flattening the curve, closed borders, cancellations, postponements, economic response measures, and employ a neologism filled with hope, that we cautiously use– deconfinement.

For the past month on Marie-Anne St., a stark silence has reigned. 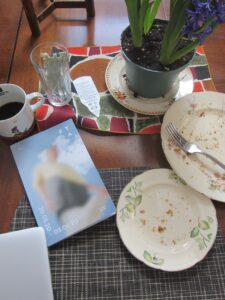 Dazed by this calamitous calm which, amazingly, has become a regular morning delight, I listen to the Apocalypse according to Justin Trudeau, along with the monotonous voice of his robotic made-in-Canada interpreter, who has perfected the art of shifting the stress patterns of the French language.

In the early afternoon I listen to the relentless death tolls presented by François Legault (now everyone’s favourite dad), followed by reminders of good hygiene and civil behaviour from the droll Doc Horacio, accompanied by the short, calm phrasing of Danielle, probably the only health minister in the world known more by her first name than by her surname. And what about the burps of ignorance and stupidity from Donald, that presidential ass whose repeated ineptitudes are plunging our neighbours to the south straight toward mortal chaos.

I am swamped by all this astonishing news, yet keep listening to it over and over again, its narcotic force leaving me in a stunned daze.

And then I find myself gazing at it, contemplating the official program of the 14th edition of the FTA, assembled with care and love, for I find this neat little book with its well-defined contours very soothing.

With its tender, pure blue sky, someone seems to float, framed by a downy cloud, appearing or disappearing – hard to say, it depends on the mood of the moment, a vague silhouette of a man or woman, or perhaps a spirit.

Is the program just sitting there, a lifeless object? No, to anyone who knows how to listen, it is buzzing, murmuring, aquiver with a strange life just waiting to burst forth.

On the four corners of this celestial cover:

Dates and words that taunt me. This program seems to belong to another world, to a bygone era, to another dimension.

I dare not leaf through it. Not right now. That would be too cruel, too futile. This pile of paper is now useless, obsolete.

Good for the recycling bin?

Yet it is full of all the energy of the FTA 2020 that did not come to pass as I would have hoped. It bears witness to the 22 shows harvested over the past two years, now lying dormant, but ever eager to take flight!

Since 2015, each edition that I have assembled has been a journey, each with its share of challenges, pitfalls and surprises, yet also moments of rapture.

This year’s version is no exception to the rule, to say the least!

Included in the program is my editorial entitled Life, Life which concludes as follows:

To quote the renowned Peter Brook, Theatre is life. Be inspired by this dynamic 95-year-old artist. Let us engage with life, for the sky is still there, an astonishing marvel.

And here we are. Through a series of impressionistic texts, I will take pleasure in experiencing with you these 22 shows in new ways, retracing how they came into being, sharing the context of their discovery, giving voice to the desire to see them come alive, retracing the ties that bind me to the artists who created them.

I will tell you how these works resonate with me, why I believed that their presence on Montreal stages could provide us with beneficial light.

The sky is still there, and so is the FTA!